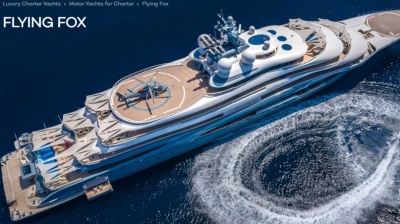 Publicity on yachtcharterfleet.com for the Flying Fox.
By bne IntelIiNews August 27, 2020

Turkey’s tourism industry for mere mortals may have been wrecked so far this year by the pandemic but the yachting super-rich appear to have picked out some of its Mediterranean attractions as better destinations than superyacht hotspots of France or Spain.

Research from Bloomberg indicates that French and Spanish coronavirus (COVID-19) case numbers and quarantine restrictions have this summer put off many of the elite looking for a berth and Turkey—particularly Bodrum, the country’s “party capital” on its southwest coast—is among nations that have won out as a result. Of course, it’s just possible that the well-heeled yachting fraternity isn’t aware of multiple reports indicating Turkey’s coronavirus outbreak is much worse than officials say it is, but the fact is that the research released this week shows that Spain has welcomed 26 fewer yachts this summer compared to last year and France has received 16 fewer—with totals of 84 and 155, respectively—while Turkey has seen the arrival of 12 more year on year for a total of 63.

As Forbes noted while digesting the figures, Turkey was once considered a playground for Russia’s elite, but it seems its waters are now attracting a wider range of visitors from around the world.

In July, Scheherazade, a superyacht owned by a Middle Eastern billionaire, caused a stir when it anchored in Bodrum. At 140 metres, Scheherazade, built by German shipyard Lurssen, is one of the world’s largest superyachts.

In mid-August, the 136-metre Flying Fox superyacht, also built by Lurssen, came to Bodrum. There is speculation that it is owned by Amazon CEO Jeff Bezos, although he has reportedly denied any involvement with the luxury vessel. It’s currently listed as a charter, and said to be the largest yacht available to charter in the world.

One downside of Turkey is the tensions with Greece over rights to eastern Mediterranean gas resources. Charter brokers have reported some clients opting against Turkey because of potential Turkish-Greek border complications.

Istanbul based Re-Pie invests $12mn in Switzerland based Colendi

Switzerland-based Colendi has raised, via its UK-based parent Colendi Holdings Limited, a total of $30mn in a Series A funding round, ... more