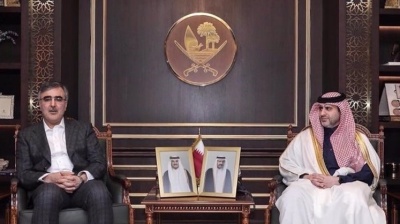 Farzin (left) met with Sheikh Bandar bin Mohammed bin Saoud Al-Thani, governor of the Central Bank of Qatar, in Qatar to discuss some of his ideas for bringing stability to where there is none. / Tasnim news agency.
By bne IntelIiNews January 12, 2023

Pity Mohammad Reza Farzin, the latest governor of Iran’s central bank, charged with getting a grip on the ungraspable Iranian rial.

The rial’s just climbed off the floor having in December belly-flopped past 400,000/$ for the first time, landing with its nose in the dirt at an all-time weak rate of 440,000/$. The rial, or IRR, has in fact lost its bearings ever since the start of the Islamic Revolution in 1979 (that’s right, it’s still going on, creeping forward, despite the unrest on Iran’s streets of the past four months aimed at sending it into reverse). Back then, more than 43 years ago, the currency was IRR 78 to the USD. When the nuke deal, or JCPOA, was signed in 2015, it stood at IRR 32,000. Prior to its latest dizzying free market descent, dollars were selling at around IRR 360,000.

Sick as a parrot, the Central Bank of Iran (CBI) was again called on to intervene, or at least talk a good game to fend off annihilation. It’s been busy doing a bit of this and a bit of that in an attempt to curb the ravenous demand for FX amid Iran’s rather obscure prospects, at one point blowing the trumpet to announce a special official dollar rate for travellers who can prove they’re headed abroad.

With inflation officially around 50%, it’s slumping shoulders time for the many Iranians who can’t conceive of a dream trip abroad, but would like to think they can still take a breezy trip to the shops. As for notions of a home buying coup? Forget it! The average Tehran property square metre in December reached IRR 500mn, up six-fold since 2018. Thousands have settled for poorly constructed satellite suburbs with poor amenities. Middle and upper class Iranians, on the other hand, are found selling up and departing the country. Turkey is a favourite destination. Citizenship is available to those who can fork out $400,000 to buy real estate in the country (the Turkish lira of course has also seen its value against the dollar destroyed in the past few years. A punch-up between the rial and the lira would be quite some spectacle).

Anyway, back to new central bank chief Farzin. A former top banker, he’ll need the backing of the clerics if he wants to do owt radical to cheer up the rial. Many observers don’t think the support is there.

Early moves from Farzin have included delaying the release of redenominated bank notes from the 2018 to 2021 stint of CBI governor Abdolnaser Hemmati. Some took it as a possible sign that Farzin is looking to get the CBI back into a reformist alignment with the grouping who fondly remember the 2013 to 2021 double presidency of pragmatist centrist Hassan Rouhani, much to the chagrin of Rouhani’s principlist successor Ebrahim Raisi. The word is that Raisi only reluctantly brought in Farzin. Needs must. The mounting fiasco surrounding Farzin’s predecessor Alireza Salehabadi, who took a nasty beating from the forex markets before he was given the boot, was a clear and present danger.

Like all of his predecessors, Farzin has vowed to take a “tough stance” against currency speculators. Stringent measures on selling FX at street bureaux de change (these include forcing people to show their outbound flight ticket prior to a hard currency purchase and limiting the amount available to $2,000) are, not surprisingly, already in place. Moves to spook traders (such as the arrest of 153 supposedly illicit market movers on Tehran’s Ferdowsi “FX street”), have been made. Many trades have moved behind double-locked doors.

‘The man in Istanbul’

In an interview on state broadcaster IRIB TV on January 7, Iran’s Economy Minister Ehsan Khandoozi was caught off guard by the news interviewer as he took a trip down blame street, saying Iran’s forex sector was under the control of outside actors. In a now celebrated moment, Khandoozi, accused an individual in Istanbul of manipulating Iran’s exchange rates. "Those active on the forex market know that a man behind a [Telegram messenger] channel in Istanbul is setting the price of the currencies in Iran," the minister asserted in his somewhat abrupt revelation. 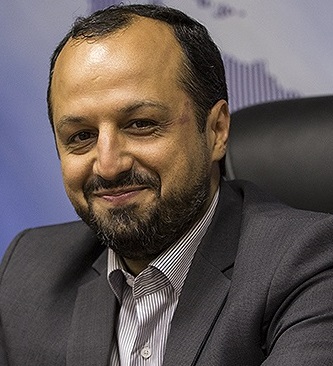 Khandoozi has his eye on outside actors (Credit: Hossein Velayati, Farsnews.ir, cc-by-sa 4.0).

Eyebrows are raised. Khandoozi, you might think, has overegged the pudding in raising such concerns but he’s not entirely barking up the wrong tree. Unbeknownst to most Iranians inside the country, rial trading occurs at several border markets, including on the frontiers with Turkey, Afghanistan and the UAE. Also in the case of Turkey, online forex traders send minute-by-minute valuations back to Tehran from the safety of Istanbul. It all adds a new dimension to the lack of market control Iranian officials complain they are experiencing.

Khandoozi provided no further details on the man in Istanbul but, menacingly, he observed that the “war” has moved into the economic sphere and that the government had, clad in tin helmet (okay, he said nothing about a tin helmet, or a tin foil hat for that matter), its work cut out in keeping market control.

Hello Gulf Arab neighbours, may I have a word

In the first two weeks of his tenure, Farzin was quick to meet and greet Iran’s Gulf Arab neighbours. There were suggestions that the new CBI head honcho was visiting Qatar and the UAE in an attempt at arranging more control for Iran of its forex market. During his visit to Doha, he may not have been a picture of calm, but he was quick to express his hopes for calm in FX trading. Iranian media speculated that he was going in for a bit of de-dollarising in the spirit of the Kremlin, attempting to get the neighbours to release Iran’s sanctions-locked funds in their own currencies.

Mehdi Taghiani, spokesman of Iran’s parliamentary Economic Commission, was also up for a spot of de-dollarising, telling CBI-affiliated news agency IBENA in the context of Farzin’s visit to Abu Dhabi that in line with Tehran’s growing regional ties, Iran would increasingly move to trade in local currencies rather than the dollar.

Once back in Tehran, Farzin remained pretty tight-lipped about what he’d been up to. But it’s clear officials are attempting to remove the dollar from as many transactions as they can to create a regional buffer. That’s right. A regional buffer is now the name of the game. And the plaque on the door of this enterprise reads “Farzin & Khandoozi”. How long before there’s a branch in Istanbul?

TEHRAN BLOG: There’s no revolution on the horizon, but something has broken

TEHRAN BLOG: Will the protests be crushed or could the Islamic regime fall?

TEHRAN BLOG: Iran takes aim at ‘gambler’ and ‘political dwarf’ Aliyev as Azerbaijan tensions simmer
TEHRAN BLOG: There’s no revolution on the horizon, but something has broken
TEHRAN BLOG: Will the protests be crushed or could the Islamic regime fall?

Reflections from our correspondents on the ground in the Iranian capital.