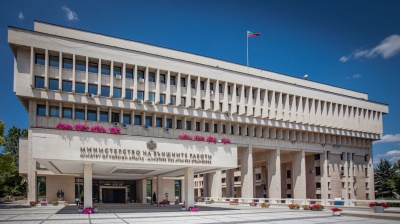 Tensions between Bulgaria and Turkey escalated ahead of the November 21 second round of the Bulgarian presidential election with protests against alleged Turkish intervention in the elections being held in Bulgaria this month.

The number of Bulgarian citizens living in Turkey who participated in the voting on November 14 — when Bulgaria held simultaneous parliamentary and presidential elections — was unusually high compared to the previous two general elections held this year, prompting Bulgarian politicians to appeal to Ankara not to interfere.

Bulgaria has a substantial Turkish minority, and supporters of the ethnic-Turk Movement for Rights and Freedoms (DPS) could play a critical role in Sunday’s runoff, when voters are choosing between the incumbent President Rumen Radev and Gerb-backed Anastas Gerdzhikov.

Radev won more than 49% of the votes in the first round to Gerdzhikov’s 24.5% and was widely believed to have been heading for an easy victory in the runoff. However, since then DPS leader Mustafa Karadayi on November 17 gave a clear signal to the party’s followers to vote for Gerdzhikov.

A victory for Gerdzhikov would complicate the formation of a new government in Bulgaria after the country’s third general election this year produced a narrow victory for the newly formed Change Continues over former ruling party Gerb.

Change Continues is led by two former members of the caretaker government installed after the April general election failed to produce a parliamentary majority. Since then, caretaker ministers, with Radev’s support, have been highly active in examining suspected corruption under former prime minister Boyko Borissov’s last Gerb-led government, and more such probes can be expected should Change Continues succeed in forming a government.

Late on November 18, Bulgarians gathered in front of Turkey’s embassy in Sofia to protest against the alleged intervention in the elections. The protesters said, as quoted by local media, that they were worried about possible interference by Turkey in the runoff on November 21.

Earlier in the week, Bulgaria’s foreign affairs ministry summoned Turkey’s ambassador to the country, Aylin Sekizkök, to ask her to urge her country not to interfere in its elections, a statement from the foreign ministry said.

The meeting, held three days after the November 14 two-in-one vote for parliament and president and ahead of the second round of the presidential election, followed claims by caretaker Interior Minister Boyko Rashkov of alleged interference by Turkey in the vote.

“The Bulgarian side expressed the expectation that the Turkish institutions and officials will categorically refrain from propaganda actions and political messages related to the election process in Bulgaria during the forthcoming second round of the elections for president and vice president of Bulgaria on November 21, 2021,” the statement said.

According to Investor.bg, Turkey responded by summoning the Bulgarian ambassador to the country, Angel Cholakov, to object to the allegations of intervention and to deny any claims that the authorities are attempting to influence voters in Turkey.

Meanwhile, Bulgarian border police launched detailed inspections of buses and other vehicles entering from Turkey during a specialised operation, which led to official protests from Turkey. The raids began in the evening of November 19, blocking the traffic from Turkey to Bulgaria. 37 buses, six trucks and 40 cars were raided at the border when entering Bulgaria, the interior ministry said in a statement on November 20.

The ministry claimed the operation was aimed at looking for illegal imports of goods and it found three tonnes of illegal cigarettes, as well as various other goods, including textiles, perfume, shoes and bags. However, Turkey claimed the operation was launched in an attempt to prevent Bulgarians living in Turkey from entering the country and voting in the second round of the presidential election.

RIMMER: Turkey - Let nothing astonish you
Mocked as the ‘Nebati Comet’, Turkey’s finance minister is accused of baffling the markets
Turkey-Armenia talks seen as key to opening up regional transit links