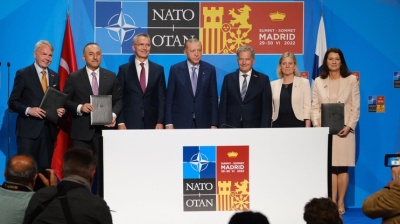 Photo released by Nato (with Erdogan centre with Nato chief Stoltenberg on his right side) as news of Turkey accepting the Swedish and Finnish Nato applications broke. / Nato.
By bne IntelIiNews June 28, 2022

Turkey late on June 28 surprised observers by unexpectedly withdrawing its opposition to Finland and Sweden joining Nato, giving the Western defence bloc a shot in the arm and dealing Russia a blow.

Most analysts were expecting Turkish President Recep Tayyip Erdogan—who has attempted to maintain Turkey’s good relations with both Moscow and Kyiv, arguing he is a potential peacemaker in the Ukraine war—to not make any such decision until at least the conclusion of Nato’s June 28-30 Madrid summit. Provided there are no hitches, what is now the unanimous acceptance of the Nordic nations' bid to join the defence alliance by all its members will enable Nato to demonstrate its unity to the Kremlin and put “more Nato” on Russia’s doorstep as the war continues to rage.

Turkey threatened to veto Finland and Sweden’s Nato applications after raising accusations that the two countries allow Kurdish militants and terrorists space to “incubate” in their societies. However, many analysts concluded Erdogan’s real concern was to use his leverage in the membership matter to get arms bans applied to Ankara by the US and many European countries lifted, while also playing hardball to strike a tough pose ahead of elections that must take place in Turkey within a year.

Erdogan spoke to US President Joe Biden on June 27 by phone and is scheduled to meet him on the sidelines of the Madrid summit on June 29. Turkey has been pushing Washington to allow it to buy F-16 jets despite an unofficial boycott by Congress on major arms sales to Ankara due to foreign policy and human rights spats.

After the Nato admittance agreement with Turkey was announced, Finnish President Sauli Niinisto said in a statement: "We had a thorough meeting with President of Turkey Recep Tayyip Erdogan and Prime Minister of Sweden Magdalena Andersson, facilitated by secretary general of Nato Jens Stoltenberg.

"As a result of that meeting, our foreign ministers signed a trilateral memorandum which confirms that Turkey will at the Madrid summit this week support the invitation of Finland and Sweden to become members of Nato."

Swedish PM Andersson told news agencies that as part of the deal with Turkey, Swedish authorities were working on extradition requests from Ankara in accordance with domestic and European law.

She told The Associated Press: “It’s good for Finland and Sweden. And it’s good for Nato, because we would be security providers to Nato.” Completing the process of membership should be done “the sooner the better, not only for Sweden and Finland but for other Nato countries”, Andersson added. “But there are 30 parliaments that need to approve this [Nato expansion] and you never know,” she also said.

Nato head Stoltenberg said in a statement: "I am pleased to announce that we now have an agreement that paves the way for Finland and Sweden to join Nato. Turkey, Finland and Sweden have signed a memorandum that addresses Turkey's concerns, including around arms exports and the fight against terrorism.”

The BBC later quoted him as saying: "He [Vladimir Putin] wanted less Nato—now President Putin is getting more Nato on its borders. So what he gets is actually the opposite of what he demanded [before invading Ukraine], and that was for Nato close its doors [to new members]."

AFP late on June 28 quoted Erdogan's office as saying Turkey "got what it wanted" from Sweden and Finland ahead of agreeing to back their Nato candidacies.

"Turkey has made significant gains in the fight against terrorist organisations," said the statement, saying that Sweden and Finland had agreed to "cooperate fully with Turkey in its fight against the [Kurdish] PKK" and other Kurdish militant groups.

The statement said they have also agreed to lift their embargoes on weapons deliveries to Turkey, which were imposed in response to Ankara's 2019 military incursion in Syria.

The two countries will ban "fundraising and recruitment activities" for the Kurdish militants, and "prevent terrorist propaganda against Turkey," Erdogan's office added in the statement.

The PKK, or Kurdistan Workers' Party, has been waging a decades-long insurgency against the Turkish state.