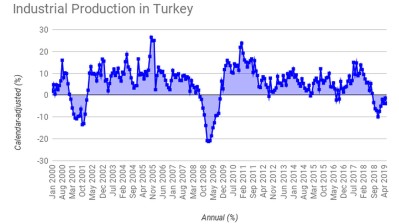 Turkey’s calendar-adjusted industrial production index contracted for a tenth consecutive month in June, shrinking 3.9% y/y, data from national statistics office TUIK showed on August 16. The figures showed the Turkish consumer is still on his knees in the wake of the economic turmoil triggered by last year’s currency crisis. The latest negative figure extends the longest streak of decline seen since the global financial crisis a decade ago.

The market consensus was that the June contraction would be limited to around 1.01% y/y, according to a Reuters poll.

Turkey’s industrial production has now contracted on an annual basis in each month since September 2018.

The country slipped into a recession following the Turkish lira (TRY) crunch, with the economy contracting 2.6% in the first quarter of this year following the 3% drop recorded in the last quarter of 2018. Economic activity has remained slow since.

"Serves as a reminder"
“The 3.7% m/m fall in Turkish industrial production in June adds to the evidence that GDP growth in Q2 was much weaker than in Q1. Leading indicators suggest that the scale of the fall in output was probably a blip, rather than the start of a deeper downturn. But it serves as a reminder that Turkey’s recovery from the recent recession will be slow and bumpy,” William Jackson of Capital Economics said on August 16 in a research note entitled “Industry collapses, although surveys point to better Q3”.

Turkey’s manufacturing PMI was negative for a sixteenth straight month in July. The index fell to 46.7 from 47.9 in June (anything below 50 denotes a contraction).

However, according to Jackson, closer inspection of the PMI suggests that the weakness in June is unlikely to be sustained. He said: “It points to a slower pace of contraction in year-on-year terms in the coming months, which is consistent with rises in production in month-on-month terms. This has been helped by a rise in new orders (both domestic and external). So while the June figure is alarming, at this stage it looks like a blip more than anything else.”

Capital Economics also observed that despite the drop in output in June, industrial production still rose over Q2 as a whole, by 0.5% q/q, thanks to stronger output earlier in the quarter. But that was much weaker than the 1.6% q/q expansion seen in Q1, it said, offering a pointer that GDP growth in Q2 was much softer than it was in Q1.

The accuracy of certain TUIK data, meanwhile, remains under question following staff and methodology changes introduced in the wake of the balance of payments crisis. Drawing any conclusions on Turkey’s trajectory based on official data might therefore place the analyst on a precarious path.

Demonstrating Turkey’s economic blues are far from over, the Turkish auto market collapsed in July. Vehicle sales plunged 66% on an annual basis. An examination of the latest indications for Turkey’s white goods market, which saw a 9% decline in sales in the first half of this year, leads to the conclusion that it may contract 15% as a whole in 2019.

Choice acquisitions
Given how many Turkish companies have fallen into dire straits since the country’s economic boom came to a shuddering halt, foreign investors are on the lookout for some choice acquisitions.

US-based AA Metals has acquired a 100% stake in Turkish aluminum sheets producer Teknik Aluminyum, Hurriyet reported on July 26. Teknik Aluminyum was under bankruptcy protection. AA has taken over the company’s TRY400mn worth of debt in exchange for sole ownership. The transaction goes down as the first sale of a Turkish company under bankruptcy protection since the currency meltdown took Turkey off the rails. Teknik Aluminyum was established in 1960 as the first local aluminum sheets producer. It was among Turkey’s top 100 exporters in 2016.

The government has brought in legislation to prevent waves of bankruptcy protection orders, while parliament lately approved legislation on restructuring loans. Turkish lenders, along with the finance ministry, are on the way to acquiring stakes in private companies. The local banks have already restructured a huge but unknown quantity of loans since the lira crisis, while, notably, they have also participated in Turk Telekom following the largest default in Turkish history. The lenders’ real estate holdings are also on the rise, but they are not yet at alarming levels.

Observers have seen some recovery signs in Turkey’s industrial production since the beginning of the year, but a reversal of the trend of contraction is still awaited.

Government stimuli via public bank lending is playing a significant role in economic activity. However, given the collapse in domestic confidence, despite the boosts given to the extension of credit there is as yet no implication that Turkey is making its way on to a sustained recovery path.

Three state-owned banks—Ziraat, Vakif and Halkbank—have reported that under a financing package known as ‘IVME’ they have provided TRY1.7bn (€275mn) in loans to a total of 11,500 companies operating in various industries. They outlined the situation in a joint statement put out on August 5.

“Another state bank credit expansion is under way in Turkey, this time 70% as strong as in Q1 ahead of municipal elections. Difference this time is that private banks are deleveraging, so partly this is a migration of private bank lending onto state bank balance sheets,” Robin Brooks of the International Institute of Finance (IIF) said on August 8 in a tweet.

The state bank lending boost is expected to continue. The official direction of the lira and the official course of inflation remain under the control of the government. But the synthetic inflation and exchange rates are the main factors hurting domestic confidence, hence the obstinacy of deposit holders who aren’t about to willingly give up their taste for dollarisation.

The global tremors, of course, are not helping. “Due to the strength of exports, industrial production was balanced to a certain extent in the first half of the year but we are seeing that foreign demand is not sufficient any more… There is already a significant slowdown in the industry sector abroad and views are increasing that this is slowly starting to affect us,” Hilmi Yavas of Yatirim Finansman told Reuters.

“Since the height of the Lira and Peso sell-off in August 2018, both currencies have weakened sharply in real effective terms, with the scale of depreciation in line with historical ‘sudden stops.’ While both [Turkey and Argentina] have seen their current account deficits narrow sharply, this is mostly due to cyclical weakness and not genuine rebalancing,” the IIF said on July 15 in a research note.

However, all depends on whether officials can prevent another currency shock.

Also, treading gingerly was S&P Global. The risk of a full-blown banking crisis in Turkey was still high but had eased in recent months with the stabilisation of the lira, the credit rating agency said on August 5.

“We are increasingly concerned about banking vulnerabilities in Turkey. Although the financial sector came through last year’s crisis relatively well, growing government intervention and deposit dollarisation suggest that the fallout from a fresh period of financial stress could be more severe,” Capital Economics said on July 24 in its latest EM Financial Risk Monitor report for Q3, entitled “Risks concentrated in the usual suspects”.

Capital has long seen Turkey’s banking industry as the most vulnerable across the EM universe. It and other observers worry that while Turkey’s currency vulnerability has approached the green zone, its sovereign vulnerability is getting closer to the red zone.

Erdogan will emerge from the summer months still badly damaged by his party’s loss of the Istanbul revote in June and its poor performance in the cities during the end of March local elections. With both dismay at Turkey’s economic morass and the smell of blood from Erdogan’s new vulnerability in the air, the autumn political season will no doubt be intriguing. The chance of there being a snap poll announcement cannot be overlooked.