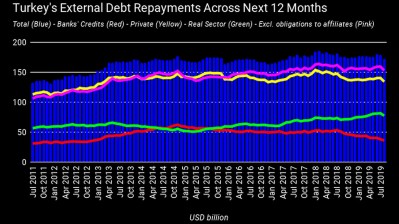 The renewal rate was 91% (see table at foot of article).

The refinancing season proceeded as the markets continued to examine whether Turkey might be hit by any meaningful US or EU ‘Syria invasion’ sanctions and amid discomfort over the reported plans of the European Bank for Reconstruction and Development (EBRD) to sell its 10% stake in the Istanbul stock exchange partly as a response to the appointment of ex-Halkbank deputy manager Mehmet Hakan Atilla, convicted and jailed in the US for Iran sanctions busting, as CEO of the bourse.

The renewal rate stood at 75%.

The costs were the same as when Akbank kickstarted the autumn renewals season on October 8, namely Libor+2.25% and Euribor+2.10%, significantly below the Libor+2.75%s and Euribor+2.65%s rates seen in autumn 2018.

Isbank and Vakifbank were also in the market. Each bank was expecting a margin cut, Global Capital reported on October 3.

According to the latest central bank data, Turkey’s overall external debt repayment obligations for the next 12-month period fell sharply by $7bn to $172bn at end-August, the lowest level since May 2017, from $179.2bn a month previously.

The figure stood at a record high of $185.9bn at end-February 2018 but declined to $173.9bn at end-October 2018 as a result of the ‘curing’ effect of the August currency crisis. But a significant recovery in Turkey’s external financing needs has not been observed since then.

When lenders’ and corporates’ obligations to their branches and affiliates abroad are excluded, Turkey was still obliged to repay $153bn in foreign debts across the next 12 months as of end-August, up from $151bn as of end-September 2018.

The data suggests that Turkish banks have been transferring their external debt weight to the real sector, but Turkey’s overall exposure has not shown a sustained improvement despite the sharp decline in August.

Meanwhile, transaction volumes on the Borsa Istanbul on October 30 remained subject to moves by officials that amount to an unofficial suspension of much trading. The benchmark BIST-100 was hovering around the 100,000-level, with the USD/TRY rate still under control at below 5.80.

The short-sales ban imposed on October 16 for Halkbank, Akbank, Garanti Bank, Halkbank, Is Bank TSKB, Vakifbank and Yapi Kredi Bank shares, after the latest Halkbank indictment in the alleged Iran sanctions evasion conspiracy filed by US prosecutors, remained effective as of October 30.

The Q3 financials season, meanwhile, continues for Borsa Istanbul-listed corporates, but as anticipated there are no promising trades.

On the economic recovery front, the government’s plan to boost domestic lending by pressuring private lenders is progressing, though too slowly for the liking of officials, while global slowdown fears are dampening dreams of capital influxes stemming from major economy central banks’ renewed monetary easing cycles.

Does the disquiet over Turkish President Recep Tayyip Erdogan’s decision to march into northeast Syria to pursue so-called terrorist Syrian Kurd fighters mean Ankara’s ambition to achieve net foreign inflows is now only pie in the sky? There’s no saying with global markets nowadays, but Turkish finance minister and Erdogan son-in-law Berat Albayrak and Turkish central bank governor Murat Uysal, who is a former Halkbank official, have cancelled their scheduled trips to the US to attend the IMF meetings. The move came after the name of Albayrak cropped up in the Halkbank indictment filed in a Manhattan court by US prosecutors of the Southern District of New York.

On October 29, the proclamation day of the Republic of Turkey, the Democrat-controlled US House of Representatives passed two resolutions with near total consensus to advise Republican US President Donald Trump to recognise the Armenian “genocide” and sanction Turkey for its “military invasion of northern Syria”.

Under Trump’s rule, the House is struggling to find its teeth. There are similarities to how the Turkish parliament is struggling to play any significant role under the “executive” Erdogan regime. It’s not difficult to imagine the two resolutions making no headway and amounting to mere ‘noise’ as Trump goes on stalling the US establishment’s salvoes.

However, given that the sanctions bill emanating from the House makes direct reference to Erdogan and his family along with Halkbank, Albayrak may have found another reason why he should not be meeting investors on US soil right now.

The EBRD’s reported withdrawal from investing in Borsa Istanbul may give Erdogan some pause for thought. It has been a top financer in Turkey despite the strongman adventures he has pursued since 2009 and has invested €11.5bn in the country in the past 10 years. The development bank is clearly irked by the appointment of Atilla as the stock exchange boss over which it says it was not consulted. Ankara clearly made the move as a demonstration of its defiance in the face of the Halkbank indictment, which Erdogan claims is a put-up job by his Gulenist enemies, but it has proved too much for the EBRD which has long had other concerns about the direction of the bourse, including its failure to make an initial public offering (IPO).

It has to be likely that there is deep unease among EBRD excutives that officials are asking it to pay the bill together with local lenders following Erdogan’s botching of the economy that has left the country with a mounting pile of problematic loans.

All-in-all, you can argue that the erosion of the foundations of Erdogan’s regime continues apace, but rather slowly. If there is a collapse, he may pull Turkey down together with him and his cronies. The opposition, which has dealt the president some stinging defeats this year, currently can’t get near him, given the impossibility of challenging the ‘national interest’ justifications given for the Syria operation and the enduring support of his patrons in the White House and the Kremlin. Will Erdogan cling on in the fashion of his Venezuelan bestie Nicholas Maduro or is he destined to be overthrown with snap polls? Two possibilities definitely worth chewing over.

In the meantime, some see the portents of an eventual Turkish economic collapse, with Turkish assets even losing their attractiveness for vulture funds.

The second hearing of 'The US vs Halkbank' case will be held on November 5.  Another date to keep in mind is November 13. On that day Erdogan is supposed to visit the White House. If the trip proves feasible, it’s doubtful that he will go anywhere near Congress.