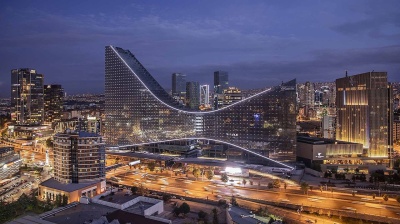 Turkey's conglomerates are carrying a huge amount of debt. Pictured is the YDA Centre in Ankara.
By Akin Nazli in Belgrade June 25, 2020

Turkish conglomerate Hattat Holding’s subsidiary Hema Group has agreed a refinancing agreement on a €400mn loan with a maturity of 10 years, Haberturk reported on June 19.

Turkish private lender Denizbank spearheads the consortium of lenders, while 22 banks, including 16 domestic banks along with a Credit Suisse-led consortium of six foreign banks, participated in the restructuring.

Under the agreement, Hema’s debts to Turk Eximbank were transferred to the consortium.

Restructuring waves in Turkey, which initiated in 2016, have not lost momentum but have strengthened.

On June 23, Turkish Finance Minister Berat Albayrak reiterated previous calls to the banks to speed up the restructuring of loans.

The government, he also said, would support the formation of an asset management company to take on the loans of problematic companies from all lenders.

The talk of setting up a “bad bank” or a joint asset management company has been discussed since the August 2018 Turkish lira crash.

In March, President Recep Tayyip Erdogan issued a decree on the Credit Guarantee Fund (KGF) to allow credits under the programme to be restructured more than once as part of the government’s response to the coronavirus (COVID-19) crisis.

The KGF was first deployed to stimulate the economy through the end of 2016 after the failed coup in July of that year that led to an economic downturn. The initial TRY250bn worth of stimuli released to Turkey’s SMEs with KGF underpinning were partly responsible for pushing the lira out to an all-time low of 7.24 against the USD in August 2018.

Prior to the coronavirus crisis, also in February, Dogus Holding, owned by the formerly secular but presently Erdoganist Sahenk family, and Yildiz Holding, owned by the Islamist Ulker family who recently had problems with Erdogan, relaunched a second round of debt restructurings on already restructured loans to benefit from synthetically pressured interest rates.

The duo initiated the first round of debt restructurings in Turkey at the beginning of 2018.

In October 2019, a new wave of restructurings was initiated under a financial restructuring (FYY) framework agreement among lenders.

Under the FYY, TRY11.1bn worth of bank debt was restructured from October 2019 to the end of April 2020, according to the latest data from the banking association TBB.

Serbia’s president claims foreign intelligence influence in anti-government protests
1 hour ago
Famous ex-defence reporter arrested, accused of treason
17 hours ago
Turkmen President Gurbanguly Berdimuhamedov takes a holiday as WHO mission finally arrives in Ashgabat
17 hours ago
Violent clashes with police at thousands-strong anti-lockdown protest in Belgrade
1 day ago
Belarus presidential election to have no outside observers, opposition may united by a single candidate
1 day ago