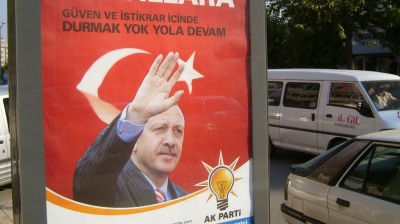 AKP poster with Erdogan thanking voters after an election win.
By bne IntelIiNews May 10, 2021

Turkey’s ruling Justice and Development Party (AKP) has seen its voter support drop by 8.5 pp to 34.1% in the past three years, Ozer Sencar, the founder of MetroPOLL Research, was on May 20 cited as saying by bianet.

What’s more, the 34.1% figure was obtained by distributing the undecided floating voters among Turkey’s political parties; prior to that distribution, the voter support tally for the AKP, led by President Recep Tayyip Erdogan, was just 27.1%.

The data was collected for the "Turkey's Pulse April 2021" public survey conducted by MetroPOLL.

Sencar mostly attributed the decline in support for the Islamist-rooted, populist AKP—which has ruled alone or in coalition for nearly two decades—to the impoverishment of households caused by the Erdogan administration’s mismanagement of the economy and the impact of the coronavirus crisis.

On May 7, Mustafa Sen, a senior AKP official, asserted that opinion polls showing the AKP vote at below 30% do not reflect the truth.

Sencar raised concern that 27% of society is "going around half-starved."

"The past year has seen a nearly 9-point decrease in the rate of those who say they can meet their all needs. In other words, the rate of those who can meet all types of needs has dropped by 33% in a year. I think this is a huge rate, this is a very significant incident. How could society get so poor in a year? This is something that can happen only in wartime," Sencar was also quoted as saying.

He added: “People have lost their jobs to a great extent, businesses have been closed, income has decreased. The aid provided by the government to the people who have incurred damages and income losses due to the pandemic is at the lowest level across the world.

“The aid granted by Turkey constitutes 1.5 percent of its national income. This rate is 30 percent in the US.”

Sencar pointed out that 62% of survey participants were of the opinion that the situation in Turkey has deteriorated. Only 19% reported a change for the better, Sencar noted, saying: "Even the AKP supporters have been divided. Half of them think that things are getting better in Turkey, while the other half say that they are getting worse."

The next presidential and parliamentary elections in Turkey are not due until June 2023, but given the country's economic crisis, opposition parties have been stepping up pressure for a snap poll.