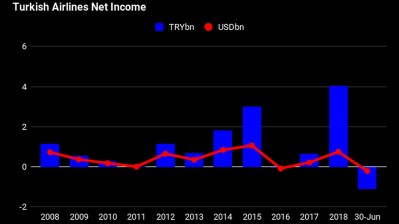 Turkish Airlines (THYAO) has cut its revenue target for 2019 to $13.4bn and its passenger target to 76mn, Turkey’s national flag carrier said on September 4 in a stock exchange filing.

The passenger target is made up of 31mn domestic and 45mn international passengers. The airline is also aiming for an EBITDAR (earnings before interest, taxes, depreciation, amortisation, and restructuring or rent costs) margin of 22-23% in 2019.

In January, the company said it was for 2019 targeting more than $14bn in revenues from serving 80mn passengers, with the passenger target comprised of 33mn domestic and 47mn international passengers.

The consolidated EBITDAR margin target was set at 22-24%.

The flagship carrier increased its total passenger volume by 10% y/y to 75mn in 2018.

In January-July, Turkish Airlines served a total of 42.3mn passengers, marking a 2.2% y/y decline. International passengers increased by only 1.4% y/y to 24.3mn while the domestic passenger total plunged 6.6% y/y to 18mn.

Turkish Airlines’ net income declined by 70% y/y to TRY133mn in Q2 despite tax revenue of TRY342mn, while revenues grew 35% y/y to TRY18.7bn, the company said on August 8 in a stock exchange filing.

“Cost per available seat kilometer (CASK), excluding fuel is expected to increase by 7%-9% in 2019,” the airline also said in its filed statement. In January, the company said it expected CASK to increase between 3% and 5% this year.

The airline has hit significant teething troubles at Turkey’s new mega airport, named Istanbul Airport, while its budget rival Pegasus (PGSUS) has benefited from passengers shifting to its main hub Sabiha Gokcen International Airport, Istanbul’s second airport, located on the Asian side of the city. The problems at the $12bn Istanbul Airport, built 20 miles outside Istanbul city centre, include poor transport links for passengers aiming to reach it.

Given the new popularity of Sabiha Gokcen, Pegasus shares have hit bubbling form since the beginning of the year while Turkish Airlines shares were oversold.

Turkish Airlines shares closed the day at TRY13.43 on February 20 when Reuters reported that Switzerland-based investment bank Credit Suisse had cut its share price target for the airline to TRY14.4.

Particularly since August 8 when Turkish Airlines and Pegasus released their Q2 financials, sales of Turkish Airlines shares have sharpened. The Pegasus share price, meanwhile, jumped into the TRY72s as of September 2 from TRY47s as of August 8.

On August 9, Turkish Airlines signalled a downward revision in its 2019 guidance.

Pegasus’ net profit jumped to TRY324mn in Q2 from TRY16mn a year ago while the company posted a net profit of TRY109mn in H1 versus a net loss of TRY100mn a year ago, according to the financial statements released on August 8.

The market had expected a net profit of TRY79mn in the second quarter.

Following the realisation of the expectations of the downward revision, with Turkish Airlines’ announcement on September 4 after the market close, the carrier’s shares were up 3.39% d/d to TRY11.88 and Pegasus shares were down 3.32% d/d to TRY66.9 as of 16:30 local time on September 5, clearly due to profit realisation in the lately popular ‘Short Turkish Airlines – Buy Pegasus’ positions.

As another example of “negligible flash crashes” in Turkish assets, Pegasus shares fell from TRY70.1 as of 11:50 local time on September 4, 10 minutes before the end of the first trading session, to TRY60.45 as of 11:55 with the sale orders from a single brokerage house.

Since last month, research reports suggesting some incredible target prices for Pegasus have been flying around although they are not explainable simply with the fundamentals.

Meanwhile, positive revisions in Turkey’s inflation and growth forecasts for 2019 are proliferating following the data releases at the beginning of this week.

JP Morgan has cut its end-2019 inflation forecast to 12.6% from the previous 14% while it raised its rate cut expectation for the next monetary policy committee meeting to be held on September 12 to 275bp from 125bp, Yarkin Cebeci of the investment bank told Reuters on September 5.

JP also increased its total rate cut expectation for the remainder of the year to 475bp from 275bp while Cebeci said an improvement in the inflation dynamics, expectations for the continuation of the improvement in inflation expectations, stability in the local currency and the low-interest global environment was enabling the Turkish central bank to continue cutting policy rates sharply.

Turkish real persons’ FX deposits at local lenders rose to $117.1bn as of August 30 from $116.7bn a week ago, latest data from the central bank showed on September 5.

The total saw a fresh record high of $117.5bn as of August 9, prior to the Feast of the Sacrifice when all Turks needed lira to spend during the public holiday.

Local and global media reports have suggested that locals have been selling their dollars since then.