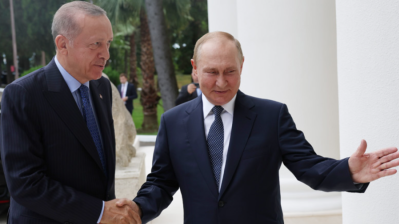 Erdogan backed the use of Mir in Turkey after an August meeting with Putin. / Turkish Presidency.
By bne IntelIiNews September 28, 2022

Turkish state banks Halkbank, VakifBank and Ziraat Bank have halted use of Russia’s Mir payment system amid a move by the US to step up pressure on Ankara over economic openings that might enable Moscow to evade Western sanctions imposed in response to the Russian invasion of Ukraine.

The trio announced that they suspended payments under the Mir system on the evening of September 27. Previously, on September 19, private lenders Isbank and Denizbank became the first Turkish banks to drop use of Mir, something like a Russian equivalent of Visa and Mastercard.

A disgruntled Kremlin responded to the Mir freeze of the Turkish state banks by saying the lenders were clearly under unprecedented US pressure and the threat of secondary sanctions.

Mir is used by many of the millions of Russian tourists who visit Turkey. But Western capitals fear it offers a potential backdoor for finance that breaches the sanctions. The payment system has in recent days also been dropped by banks in countries including Uzbekistan, Kazakhstan, Tajikistan and Armenia.

Turkish President Recep Tayyip Erdogan in early August  vocally backed the expansion of Mir in the country after a meeting with Russian counterpart Vladimir Putin, but extensive use of the system by banks in Turkey could have brought on sanctions that would impact the lenders’ operations on international financial markets.

Recent days have brought a noticeable cooling in Ankara’s sometimes defiant assertions that, despite events in Ukraine, it has every right to stay on good terms with Moscow and accelerate economic cooperation with Russia. The change has come following the military mobilisation announced by Putin last week and the running by Russian occupation officials of quickly organised referendums in breakaway territories of Ukraine occupied by Russian armed forces.

Turkey is the only Nato member state not to have imposed Ukraine war sanctions on Moscow. Ankara has argued it is in a position to keep amicable relations with both Ukraine and Russia in the hope of serving as a trusted intermediary should there be an opportunity for peace talks. It also defends its no-sanctions policy on the basis that the Turkish economy would be unduly exposed to impacts from Turkey imposing penalties on Russia, which, like Ukraine, is a maritime neighbour of the country and key counterpart in trade and investment.

Turkey has also kept its airspace open to Russian planes, giving Russians much-needed travel and tourism opportunities in the face of multiple European and other airspace bans that have closed off such opportunities elsewhere. The dropping of Mir thus also comes as a blow to Turkish tourism officials, though they will be relieved that the high season for holidaymakers is over.

Polish proposed ban on Russian rubber may give the European tyre industry a flat
7 hours ago
Prague to have a new municipal government after record-long negotiations
11 hours ago
Party congresses of Hungarian opposition demonstrate deep divisions
12 hours ago
At least 500 dead after huge earthquake hits Turkey, Syria in early hours
12 hours ago
Turkish minister tells US ambassador ‘Take your dirty hands off Turkey’ as sanctions sparks fly
17 hours ago