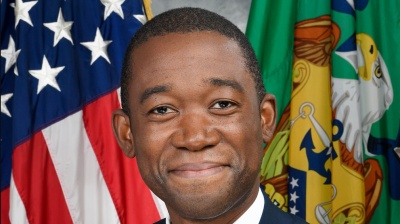 US Deputy Treasury Secretary Wally Adeyemo is on the case. / US Dept of the Treasury, public domain.
By Akin Nazli in Belgrade September 19, 2022

Signs that US warnings to Turkish businesses over helping Russia to skirt sanctions are starting to have an effect were in evidence on September 19 as two banks in Turkey suspended use of banks cards issued under Russian domestic payments system Mir.

First, Istanbul-listed Isbank (ISCTR) told news services that it was suspending clients’ use of Mir cards, saying it was seeking clarity on the sanctions. A little later in the day, Denizbank (a unit of Emirates NBD) told Reuters “We are currently unable to provide service” in Mir, after earlier saying that the bank “acts in accordance with international sanction regulations”.

Also on September 19, a correspondent of Russian news service TASS confirmed that he could not withdraw Turkish lira cash from an Isbank ATM with his Mir card.

On September 15, Russian media reported that some hotels in Turkey had stopped accepting Russian credit cards that link to the Mir system.

Also on that day, some unnamed US officials told the Financial Times that the US was focusing on Turkish banks that have integrated into Mir.

On September 13, the US Department of the Treasury’s Office of Foreign Assets Control (OFAC) sanctioned the chairman of Mir and served a warning on the heightened risk of facilitating Russia’s efforts to evade Ukraine war sanctions through the expanded use of the National Payment Card System (NSPK) or the Mir National Payment System.

Isbank told Bloomberg that it had seen the US Treasury’s statement on the issue and was evaluating it.

Prior to the war sanctions imposed on Russia, Isbank and its two government-run local peers, Ziraat Bank and Vakifbank (VAKBN), were already integrated with Mir.

Following the imposition of the sanctions, Denizbank and state-run Halkbank (HALKB) also established connections to the Mir system.

Russians in Turkey can use other participating banks’ ATMs to cash out money. Halkbank, often seen as close to Turkey’s Erdogan administration, is thought unlikely to cease the service.

Since June, US Deputy Treasury Secretary Wally Adeyemo has visited Ankara and has held phone calls with, and sent some letters to, Turkish companies. Adeyemo is involved in sanctions enforcement.

A US Treasury letter sent to big Turkish businesses in August warned that there was a risk of penalties for companies that maintained commercial ties with sanctioned Russians. Private companies will generally shy from risking rows with the US.

Government-run Halkbank, meanwhile, remains accused by New York prosecutors of, starting from 2012, involvement in an Iran sanctions-busting scheme. As yet, the prosecutors, given process appeals, have not managed to have their case against Halkbank heard by a court. Only a former deputy general manager at the bank, Hakan Atilla, has been convicted. He spent two years and four months in jail in the US.

The court where Atilla was tried—after star prosecution witness Reza Zarrab, head of the sanctions-busting scheme, was persuaded by prosecutors to confess—heard that Atilla did not personally receive money from the scam. He was, even Zarrab maintained, simply carrying out his duties under the scope of his post at the state-controlled bank.