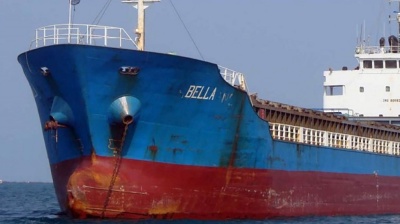 US authorities seized the fuel from four tankers in mid-ocean including the Bella.
By bne IntelIiNews September 2, 2020

The owners of four Iranian fuel shipments seized from tankers by the US last month have mounted a legal challenge to the seizure, according to a court filing.

The US Justice Department announced the seizure of the fuel, amounting to 1.116mn barrels, that it claimed was destined for Venezuela, which like Iran is subject to heavy American sanctions. Tehran and Caracas have drawn Washington’s ire by starting a strategic relationship that has involved fuel-laden tankers making their way from Iran to Venezuela to alleviate the latter’s gasoline shortages caused by US sanctions that have hindered the operations of its refineries.

The companies added that they had sold the cargoes onwards to United Arab Emirates-based Citi Energy FZC, but payment was due upon delivery, which was disrupted by the mid-ocean seizure.

“Therefore, Claimants Mobin, Oman Fuel, and Sohar Fuel retain a financial stake in those agreements and have immediate right to title, possession, and control of the Defendant Properties,” the companies wrote.

The companies also disputed the US assertion that the shipments were bound for Venezuela. “At the time they were seized, the Defendant Properties were destined for Trinidad for sale to customers in Peru and Colombia,” the companies wrote in the filing.

Venezuela shares a maritime border with the Caribbean dual-island nation of Trinidad & Tobago, and a land border with Colombia.

On August 17, Iran’s Petroleum Minister Bijan Namdar Zanganeh confirmed that the fuel seized by the US from the tankers was Iranian but added: “The cargoes were loaded from Iran, but neither the ships nor the cargoes belonged to Iran, and the US declared victory for itself in the middle of this. The fuel was Iranian, but it had been sold to Venezuela and its payment had been cleared.”

It’s unclear where the ships were at the time of the seizures because they had all turned off their satellite-tracking systems to avoid detection, according to data compiled by Bloomberg.

UK, Canada impose sanctions on Lukashenko and his top officials
13 hours ago
Poland tightens restrictions in response to rising coronavirus cases
14 hours ago
World must tell Turkey to “get out” of Caucasus says Armenian PM
17 hours ago
French President Macron promises Belarus’ opposition leader Tikhanovskaya to do all he can to help
1 day ago
Nobel laureate and Coordinating Council member Svetlana Alexievich leaves Belarus for medical treatment in Germany
1 day ago