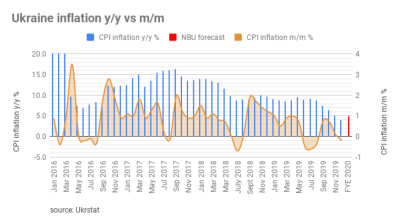 Ukraine’s consumer prices declined 0.2% month-on-month in December from 0.1% m/m growth in November, mostly due to declining prices for clothing and footwear, housing and utilities, and transportation, while annual inflation slowed to 4.1% year-on-year from 5.1% y/y in November (and 9.8% y/y in 2018), the nation's state statistics service Ukrstat reported on January 9.

On top of that, transportation prices declined 0.8% m/m due to a 0.8% m/m decline of prices for gasoline.

Core inflation (the consumer basket excluding goods and services with the most volatile prices) declined 0.3% m/m in December (a 0.1% m/m growth in November). Annual core inflation slowed to 3.9% y/y.

Evgeniya Akhtyrko at Kyiv-based brokerage Concorde Capital believes that the accelerated appreciation of the national currency by 3.2% in December resulted in disinflation outweighing the traditional increase of consumer activity prior to the holiday season.

"The appreciation of the exchange rate fostered the decline of prices for items with a high share of imports, namely clothing, footwear, gasoline and fruits. In addition, the decline of global prices for energy resources prompted the government to lower tariffs for natural gas consumed by households," she added in a note on January 10.