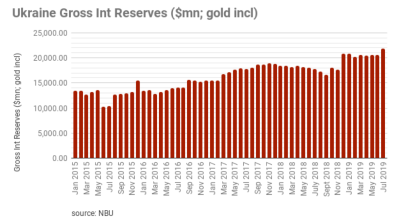 Ukraine's international reserves increased by 5.8% month-on-month to $21.84bn in July following a 6.4% m/m growth in June, according to the National Bank of Ukraine (NBU)

The result was mainly attributed to the central bank's interventions in the interbank foreign exchange market, spending a total of $1.3bn.

"The favourable situation" in the FX market, which appeared due to an increase in an interest of non-residents in hryvnia government domestic loan bonds, as well as" the preservation of a positive pricing environment for Ukrainian exports and moderate volumes of imports", led to a significant excess of foreign currency supply over demand, the regulator said in a statement on August 6.

In July, Kyiv has repaid around $1bn, of which $941mn was spent on servicing and repaying foreign currency government bonds, and the rest was spent on fulfilling "other obligations to foreign creditors and international financial institutions".

As of early July, Kyiv's international reserves covered 3.4 months of Ukraine’s imports and "were sufficient for Ukraine to meet its obligations and for the government and the NBU to conduct their current transactions", according to the regulator.