Ukraine’s investment summit on the front line of a war 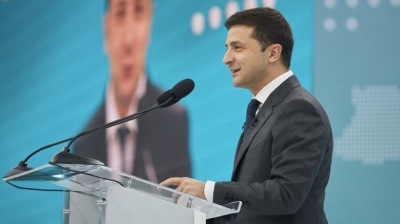 President Volodymyr Zelenskiy woos investors at an investment summit in Mariupol just 20km from the front line.
By Fabrice Deprez in Mariupol October 30, 2019

Ukraine’s new government held an investment summit in Mariupol on October 29, barely 20km from the frontline in the undeclared war with Russia. International investors and Ukraine’s donors flocked to the Black Sea port town where President Volodymyr Zelenskiy urged them to come and grab the opportunity to invest in his country by the horns.

The Donbas conflict quickly emerged as a key theme of the investment forum that was attended by the entire Ukrainian Cabinet — something that comes naturally with holding a business event within shelling distance of an active war zone.

Most of Ukraine’s top officials — including the foreign, interior, finance and prime ministers — as well as representatives of major western companies, international institutions and embassies made the trip to Mariupol, putting the spotlight on the biggest Donbas city still under Ukrainian control.

The goal was two-fold for Zelenskiy, who has the flair of a showman and set the project in motion during the summer. He organised the forum to reassure foreign investors and western institutions concerned about the government's plans as well as the potential influence of oligarch Ihor Kolomoisky, while trying to convince the population of eastern Ukraine of the government's willingness to support a region wrecked by a five-year long conflict.

The Ukrainian president hit all the major notes in his keynote speech, including a rare clear declaration on the sensitive case of PrivatBank, which was nationalised in 2016, and that Kolomoisky, who supported Zelenskiy’s presidential run, has since vowed to get back.

“I want to reach out to anyone spreading rumours that people from the president's team or the new government are going to return their banks to the former owners,” Zelenskiy said. "No, that's not true.”

Kolomoisky is currently pursuing the return of the bank through the Ukrainian courts and the Kyiv Economic Court was supposed to deliver its verdict on October 17. However, after International Monetary Fund (IMF) suspended talks on a badly needed Extended Fund Facility (EFF), citing uncertainty over the fate of PrivatBank, the court appears to have come under pressure. The judge in the case is reportedly blatantly biased in Kolomoisky's favour and the court was expected to rule the bank should be denationalised. However, after the IMF froze talks on the new support programme the court has since suspended the hearings while it hears “new evidence” that has surfaced related to the case.

Prime Minister Oleksiy Honcharuk weighted in on the other theme of the conference, corruption, and urged investors to denounce top level graft, promising to deal with such cases “with napalm”.

The conflict in Eastern Ukraine stayed at the forefront of the event, with Zelenskiy declaring that “our very first task is to cease hostilities in Donbas.” As he was speaking reports came in that Ukrainian and Russia-backed separatist troops had started to disengage near the hotspot frontline village of Zolote. The move is part of an attempt by Kyiv to resuscitate the Donbas peace process that could potentially lead to a new Normandy Four summit between Ukraine, Russian, France and Germany.

The forum, titled “Re:Think” and packed with more than 700 participants according to the presidency, ostensibly aimed to showcase investment opportunities in Ukraine and more specifically in the eastern part of the country. While several large-scale agreements were announced — including a memorandum with Ukrainian mobile operators to ensure a “complete mobile internet coverage of the country,” according to Zelenskiy — not everyone expected the forum to directly lead to increased investment.

“Of course it’s not enough,” Deputy Minister of Infrastructure Viktor Dovgan told bne IntelliNews. “Investment will come with the reduction of corruption, the end of the moratorium on the sale of land and other reforms. The goal is to bring people here in Mariupol and to show them what can be done.”

The act itself is already a feat, several participants noted: with its airport closed since June 2014 and a gruelling, 18-hour train journey from Kyiv, the city is known as one of the hardest to reach in Ukraine. “It’s like West Berlin,” one official quipped.

Most foreign investors remain wary of investing in the Donetsk and Luhansk regions, both only partially under Ukrainian control, with the proximity to the frontline adding to the usual concerns about endemic  corruption and poor infrastructure.

"It’s still very risky to invest in Donbas,” Maksym Zinkovsky, the director of a company producing honey as well as equipment for honey farms, told bne IntelliNews. “And when it comes to the new authorities, we’re still not sure which way the wind is blowing.”

Based in Starobilsk, a city in the Luhansk region nearly 400 km north of Mariupol, Zinkovsky’s company now exports 90% of its production to the European Union; before the war, almost everything went to Russia, just 100 km to the east.

The battle for hearts and minds

With a focus on the conflict and the need for reconstruction, the forum also sought to appeal to those beyond the suit-wearing, English-speaking crowd of foreign businessmen and diplomats roaming the event. Zelenskiy touted the recently-completed construction of 130 km of road between the central Ukrainian city of Zaporozhye and Mariupol in just 68 days, referring to the project as the kind that would “unite the country… not just the people, but the infrastructure too.”

The promise to bring a quick end to a conflict that has already killed more than 13,000 people helped Zelenskiy secure a massive victory in the April 2019 presidential election. For a long time one of the hearts of the Soviet and later Ukrainian economy, the industrial regions of Donetsk and Luhansk suffered massively from the conflict. The war not only destroyed factories, bridges and roads and forced thousands of people to leave the region, it also left most of the coal mines that were key suppliers of fuel to Ukraine’s power stations in the hands of the Russia-backed separatist republics of Donetsk and Luhansk.

The president has since made the reconstruction of the Donbas region one of the key aspects of his peace strategy, and announced during the forum the launch of an “International Partnership Support Fund for the reconstruction and future reintegration of Donbas” in cooperation with the World Bank.

But it remains unclear whether investment can really flow before the conflict has ended. “We need a stable political situation, the end of the war, that’s all,” Zinkovsky said. “It’s been going on for five years. Damn it, World War 2 lasted five years as well. That’s long enough.”

COMMENT: Romania’s foreign debt, reserves and gold during the pandemic
2 days ago
Moldova’s foreign policy reset
4 days ago
Attack of the Debt Tsunami: global debt soars to a new all-time high
7 days ago
Kyrgyzstan's China debt: Between crowdfunding and austerity
8 days ago
Rural Russians are moving to cities to escape the impoverished regions
9 days ago