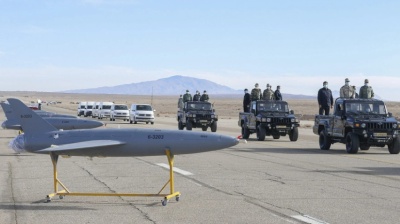 Iranian drones would be useful to Russia for both reconnaissance and as loitering munitions, according to military experts. / Iranian Armed Forces.
By bne IntelIiNews September 24, 2022

Ukraine has stripped Iran’s ambassador to Kyiv of accreditation in a downgrading of relations with Tehran over the claimed equipping of Russian armed forces with Iranian military drones.

The move, which came late on September 23, was made after Ukraine announced that it had downed four Iranian-made “kamikaze” unmanned aerial vehicles (UAVs).

In late July, the Pentagon issued a rare warning to Iran after receiving intelligence of a potential transfer to Russia of hundreds of drones that could be used in the Kremlin’s war against Ukraine. Shortly before the US raised concern, Russian leader Vladimir Putin got a sympathetic reception when he visited Tehran, with Iran’s Supreme Leader Ayatollah Ali Khamenei telling him: "If you did not take the initiative, the other side would have caused the war with its own initiative. If the road is open to Nato, it knows no boundaries and if it was not stopped in Ukraine, they would start the same war some time later under the pretext of Crimea.”

Iran has denied supplying military drones to Russia. But given the evidence shot out of the sky, Ukraine has decided that the supply line exists. Iran’s decision to provide Russia with drones was "unfriendly", Kyiv officials said.

"Supplying Russia with weapons to wage war against Ukraine is an unfriendly act that deals a serious blow to relations between Ukraine and Iran," said a statement on the Ukrainian foreign ministry's website.

"In response to such an unfriendly act the Ukrainian side has decided to deprive the ambassador of Iran of his accreditation and also to significantly reduce the number of diplomatic staff of the Iranian embassy in Kyiv."

The decision was communicated to the Iranian acting ambassador since the permanent envoy, Manouchehr Moradi, was not currently in Ukraine.

Military authorities in southern Ukraine said in a statement that they shot down Iranian Shahed-136 “swarm” UAVs over the sea, near the Black Sea port of Odesa.

Military experts have said Iranian drones would be useful to Russia for both reconnaissance and as loitering munitions—such drones can hang in the sky for prolonged periods before engaging a target.

In comments following the downgrading of bilateral ties, Ukrainian President Volodymyr Zelenskiy observed that Tehran was harming Ukrainian sovereignty and its citizens through its actions in supplying Russia with drones.

On September 24, Iran’s foreign ministry spokesperson, Nasser Kanaani, “advised” Ukraine to “refrain from being influenced by third parties who seek to destroy relations between the two countries”, Reuters reported.

Turkmenistan: Small stature, big statue
Iran denies setting up combat drone factory with Russia
COMMENT: The new Cold War will be different, and not only because of China