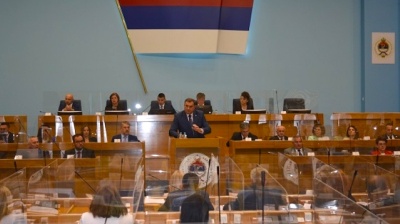 MPs in Bosnia & Herzegovina’s Serb entity, Republika Srpska, have voted to delay by six months the plan to pull out from state-level institutions due to the Russian war in Ukraine, according to a resolution adopted by the entity’s parliament.

Bosnia comprises two autonomous entities – the Serb-dominated Republika Srpska and the Muslim-Croat Federation, each of them having its own parliament, government and president. The country also has state-level institutions and a tripartite presidency comprising of one representative of each people – Serb, Croat and Bosniak (Bosnian Muslim).

The decision to pull out of the state-level joint military, top judiciary body, and tax administration was announced at the end of 2021 by Milorad Dodik, the Serb member of the tripartite presidency and the leader of Republika Srpska’s ruling party, the SNSD. Dodik has been threatening secession for years but so far has not taken decisive steps towards this.

During the same session, the entity’s parliament also decided that Republika Srpska’s representatives in the state-level institutions should vote against the imposition of sanctions against Russia.

Dodik invited the Russian ambassador to Bosnia, Igor Kalabukhov, to attend the parliament session and speak to lawmakers.

Only three opposition MPs objected to the invitation. They left the plenary session during Kalabukhov’s speech.

Kalabukhov called Republika Srpska "Moscow's crucial partner”, according to N1. He also accused part of international community of “the selfish desire to implement their political agenda, especially through the imposition of Euro-Atlantic integration, which has led to the corrosion of the Dayton Accords”.

Kalabukhov said he opposed the appointment of Christian Schmidt as the new high representative in Bosnia, saying it was an example of the “international community's bad policy”.

Shortly before Russia's invasion of Ukraine in February, EU foreign policy chief Josep Borrell warned that Bosnia was one of two European hotspots, along with Ukraine, with the "stability and even the integrity" of Bosnia at risk.

The international community issued a joint statement prior to Kalabukhov’s statement, calling on lawmakers to “stand up for civilisational values by rejecting Russia’s cynical disinformation and standing on the side of thousands of Ukrainians who are being targeted, kidnapped, raped, tortured, and killed in Russia’s war”.

The statement also noted that the international community respects the rights of all three Bosnian peoples and that it will not give up on the country despite Russia’s “divisive influence”.

“The EU and the United States remain friends and partners of Bosnia & Herzegovina, and of both entities and the Brcko District, as integral and crucial parts of the country.  Moscow’s manipulation does not have the power to weaken our support or destroy the resolve of BiH citizens fighting for a brighter future within the Euro-Atlantic community of nations,” the statement noted.