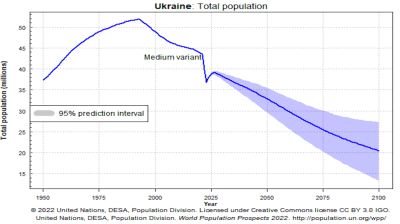 Ukraine's population decline will be accelerated by the war. / UN
By bne IntelliNews August 24, 2022

Ukraine will never fully regain the population lost to death and mass displacement since Russia’s invasion in February, according to the latest set of projections from the United Nations.

The UN Population Prospects projections indicate that while the country’s population will recover to some extent from 2023 onwards – assuming the war ends within months – it will never again reach the 43.3mn seen at the beginning of 2022.

Instead, the UN expects that after a partial recovery as some refugees return to their homeland over the next few years, Ukraine’s population will gradually decline until 2100 by which time it will have fallen to under 20.6m.

This comes in the context of an expected fall in populations across Emerging Europe this century, with the exception of the fast-growing Central Asia region.

Already millions of people have left the country. As of August 10, over 6.3mn refugees from Ukraine had been recorded across Europe, according to UN data. That included over 1.2mn in Poland and over 80mn each in Moldova, Slovakia and Romania.

While some are already returning now that the immediate threat to Kyiv has lifted – it was reported in May that estimated 25% of displaced Ukrainians had returned home – others are expected to stay away at least until the war ends. 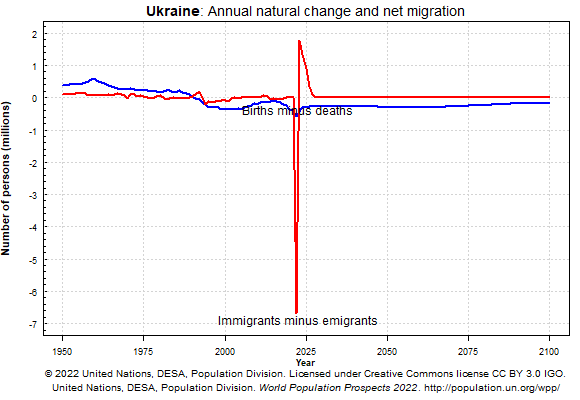 Others are expected to stay away for good, especially those from any parts of the country that end up under Russian occupation or become a frozen conflict zone when the war ends. Such areas would be left out of the anticipated reconstruction.

A report by the Kyiv Independent earlier this year pointed out that the demographics of those leaving the country is also a factor. Ukraine already has one of the lowest birth rates in the world and the war will only exacerbate this problem. Many young women left the country since the invasion and a decrease in the percentage of fertile women may lead to a falling birth rate, resulting in a “downward spiral of demographic decline”. 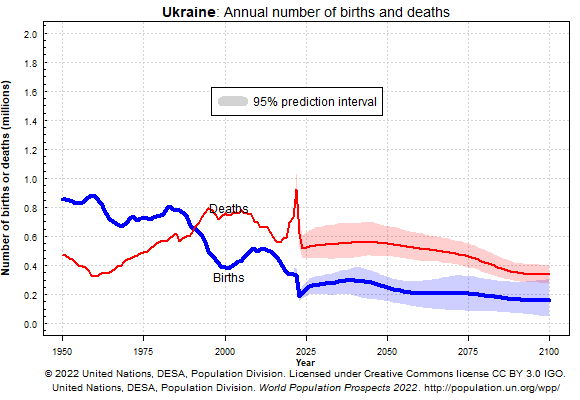 While billions of euros are set to be pumped into Ukraine when the reconstruction begins, the country was among the poorest in Europe even before the start of the war.

The month before the invasion, wages decreased to UAH14,577 per month in January from UAH17,453 in December 2021, according to the National Bank of Ukraine (NBU) data. In dollar terms, that dragged the average wage in Ukraine below that in neighbouring Moldova, previously Europe’s poorest country.

Moreover, Ukraine is suffering from high despair rates as the war came on top of two years of pandemic, according to the despair index invented by bne IntelliNews several years ago as an indicator of the pain the bottom third of society feels during a crisis. It is based on the “misery index”, which is simply the addition of inflation and unemployment.