US and Germany strike deal on Nord Stream 2 pipeline 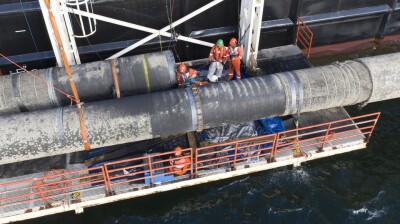 The US and Germany reached a bilateral agreement on Nord Stream 2 on July 21 that will allow the pipeline to be completed without further US sanctions.

Nord Stream 2 will pump 55bn cubic metres per year of Russian gas to Germany when it reaches full capacity. The pipeline is politically controversial as Russia wants to use it to divert as much gas as away from Ukraine as possible, to reduce costs and starve Kyiv of billions of dollars of annual transit revenues.

At a meeting between US President Joe Biden and German Chancellor Angela Merkel, the US and Germany agreed to take action against Russia if it uses Nord Stream 2 to harm Ukraine or other East European countries.

“The United States and Germany are united in their determination to hold Russia to account for its aggression and malign activities by imposing costs via sanctions and other tools," said the joint statement.

“Should Russia attempt to use energy as a weapon or commit further aggressive acts against Ukraine, Germany will take action at the national level and press for effective measures at the European level, including sanctions, to limit Russian export capabilities to Europe in the energy sector,” it said.

The agreement comes after talks between the two leaders on July 15, after which they stressed that they would work together to ensure that Ukraine would remain a transit route for Russian gas heading to Europe.

Germany wants to see Nord Stream 2 realised, as it will enable the country to tap lower-cost gas to support its economy and provide valuable transit revenues.

This posed a dilemma for the new US president as he sought to rebuild ties with Germany that were damaged during the Trump era. The US fears that Russia will use the pipeline as a tool to assert political pressure in Europe, although Moscow accuses Washington of simply looking out for the interests of its US exporters.

Inevitably the agreement has been poorly received in Ukraine, where Foreign Minister Dmytro Kuleba issued a joint statement with his counterpart from Poland — Central Europe’s chief Russia hawk — Zbigniew Rau condemning the move.

“The decision to build Nord Stream 2 made in 2015 mere months after Russia’s invasion and illegal annexation of Ukrainian territory, created security, credibility and political crisis in Europe,” said the statement from Kuleva and Rau.

“Currently, this crisis is significantly deepened by the resignation from attempts to stop the launch of the NS2 gas pipeline. This decision has created political, military and energy threat for Ukraine and Central Europe, while increasing Russia's potential to destabilise the security situation in Europe, perpetuating divisions among Nato and European Union member states.”

They added that "Ukraine and Poland will work together with their allies and partners to oppose NS2 until solutions are developed to address the security crisis created by NS2”.

In an attempt to ease the blow on Kyiv, the US finally issued the much-anticipated invitation to Ukrainian President Volodymyr Zelenskiy to visit to the White House on August 30. “An invitation for “later this summer” had been announced in June before Biden met Russian President Vladimir Putin in Geneva, but a date had not been set until Wednesday,” wrote BMB Ukraine in a note on July 21.

For its part, Germany has agreed to provide Ukraine with $1bn to support its transition to cleaner energy, supplied by private sources backed with government guarantees in a Green Fund for Ukraine. This includes an initial investment of $175mn, as announced on July 21. The US will support the initiative with technical assistance and policy support.