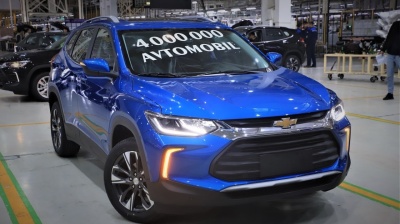 The four millionth car produced by UzAuto, a milestone reached in November 2022. / UzAuto Motors
By Muzaffar Ismailov in Tashkent December 1, 2022

UzAuto Motors, the largest car manufacturer in the CIS, has announced the launch of a subscription campaign for its initial public offering (IPO).

In 2023, the automaker plans an IPO on a foreign exchange. The company will use the funds received to ramp up production capacity and other development projects.

This will be the third ever IPO in Uzbekistan. In 2018, the Quartz glass factory was publicly placed, and in 2019-2020 the plastic manufacturer Gizz Plastic.

The listing is one of a series of three “People’s IPOs” due to take place before the end of the year, where the first stakes in three major enterprises will be sold off via the Tashkent Stock Exchange, as reported by bne IntelliNews. Small stakes will be sold in some of the most attractive companies in the country.

The other two companies preparing to IPO are UzMetKombint, the country’s largest steel maker, and QQB, a top 10 bank and the Uzbekistan’s largest mortgage lender.

The IPOs are the first step in a grand plan to get the government out of business and place dozens of leading companies into the hands of private enterprises as part of the transformation begun by President Shavkat Mirziyoyev in 2016.

UzAuto’s listing is due to launch on December 1 and will last until December 22.

The sole shareholder of UzAuto approved the consolidation of securities in the format 5,000:1. The authorised capital of the concern now consists of 270mn shares with a nominal value of UZS5,000.

From 2.7mn to 13.5mn shares (1-5%, as previously reported) will be put up for auction. The lower limit of the price range is UZS72,510, the upper one is UZS81,573. The investment intermediary for the IPO is a consortium led by Freedom Broker.

Founded in 1993, UzAuto produces a wide range of Chevrolet brand cars according to the full cycle type (CKD). In Uzbekistan, production is carried out at factories in Asaka (Andijan region) and Pitnak (Khorezm region). It has also established assembly lines in Kazakhstan and Azerbaijan.

The company has already increased production in recent years. On November 5, the company announced that the four millionth car rolled off its assembly line. The car was a Chevrolet Tracker, which the company started producing at its plant in Asaka in July.

“[I]t took 22 years to reach the previous anniversary volume of 3,000,000 vehicles. The milestone of 4mn was reached in just four. All this became possible thanks to the transformation of the automotive industry, the increase in capacity, the modernisation of production processes, as well as the deepening of localisation,” the company announced at the time.

UzAuto aims to produce 500,000 vehicles in 2023, with an increase to 1,000,000 in the future. Other plans include the launch of production of the Chevrolet Onix and further expansion in Central Asia.

Russia forges ahead with gas ambitions in Uzbekistan, Kazakhstan
bneGREEN: Renewable energy was a hot topic in Davos but for Europe, much work remains
Big freeze that was feared by gas hungry Europe hits Central Asia, Iran