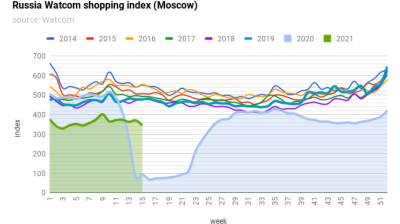 Historical comparisons suggest retail traffic is down by a third and that is a permanent change.
By bne IntelliNews April 28, 2021

The Watcom shopping index was up a massive 267% year on year in week 15 of 2021 (April 12 to 18), but the “gain” was of course because the index is measuring against the first weeks of last year’s pandemic lockdown.

Moscow Mayor Sergey Sobyanin abruptly ordered Muscovites to stay at home in Week 13 of that year, causing retail sales to crash and ushering in about two months of very strict stay-at-home restrictions.

Retail sales didn't start to recover until Week 23 (June 1 to 7), when the restrictions started to be eased, but then grew strongly throughout the remainder of the summer and nearly recovered the same level as a year earlier in Week 31 (July 27 to August 2). However, the index, which measures foot traffic at Russia’s largest malls in real time, fell again as summer came to an end as a second wave of the epidemic got under way.

The index’s y/y numbers have become fairly meaningless but a comparison with 2019 results shows that foot traffic remains down by about a third from its historical average.

And that has already been declining steadily each year as more and more of Russia’s retail business goes online. As reported by bne IntelliNews Russia’s e-commerce is booming and the pandemic has only catalysed the process. The drop in the foot traffic volumes are likely to be permanent, as the nature of retail was already going through some big changes before the pandemic started.

In the meantime, while the economic bounce-back has started, with industrial production going back into the black with 1.1% growth in March, the first growth in a year, retail sales remain underwater on a y/y basis, although March is a comparison with the last pre-lockdown month.

Russia's retail trade fell 3.4% from a year earlier in March of 2021, following an upwardly revised 1.5% drop in the previous month and more than the expected 1.3% decrease.

March was the twelfth consecutive month of declines in retail activity amid the pandemic crisis. Sales continued to fall for both food (-6.0% vs -3.0% in February) and non-food products (-0.8% vs 0.1%).

As the standard y/y comparisons have lost their meaning analysts are starting to look more closely at the month-on-month results to try to work out what is actually going on in the economy.  And there the news is better.

On a monthly basis, Russia’s retail sales jumped 9.2% in March (the last data available), after a 2.4% drop in the previous month. Considering the first quarter of 2021, retail activity shrank 1.6% over that of a year ago, according to Rosstat.

Also holding retail back is the ongoing contraction in real incomes, although one of the side-effects of the lockdown is that savings have soared and have created a pool of cash that economists expect to be unleashed as Russia comes out the other side of the pandemic.

After going positive very briefly at the end of 2019 as the spending on the 12 national projects started to trickle down to the population, real incomes fell by 3.5% in 2020 due to the pandemic shock, leaving the average Russian’s income 10% lower than in 2013.

One survey showed that after a six-week lockdown at the start of the pandemic, nearly half of households had no savings or only enough to cover a month of expenses.

At the same time, food prices have risen by 7.7% since February 2020 y/y. The costs of basic products such as sunflower oil and sugar have grown by 27% and 48% respectively, causing the Kremlin to impose administrative measures designed to keep the prices of staples under control.

However, drilling into the numbers and it appears demand and consumption amongst consumers has already started to improve.

Another important indicator of consumer demand – the volume of paid services to the population – posted 1.4% y/y growth in March, thus signalling that the pandemic-driven recession in the consumer area is finally ending. The seasonally adjusted IHS Markit Russia Services Business Activity Index also jumped to a seven-month high of 55.8 in March, up from 52.2 in February, its strongest result in well over a year.

Volumes of residential construction jumped 19.8% y/y – their highest rate in six years – while real wages rose 2% y/y in February. The unemployment rate in March dropped to 5.4% from 5.7% in February and the peak level of 6.4% in August 2020.

Going forward, the rate and strength of Russia’s bounce-back will depend on a number of factors outside the Kremlin’s control, including the threat of new sanctions, the size of this year’s harvest and the price of oil on the international commodity markets, but the government is assuming a modest 3.3% expansion, which remains well below the potential growth thanks to the Kremlin’s policy of austerity budgets to protect against the sanctions threat.