What are Russian troops still doing in Belarus? 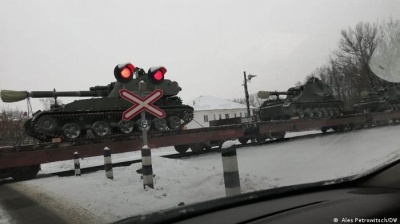 While the front line has moved to Eastern and Southern Ukraine, Russian troops still remain in Belarus. Lukashenko is also becoming increasingly uneasy over his international isolation and the regime has expressed interest in reopening a dialogue with the West. So what are the Russian troops still doing in Belarus and what are Lukashenko's objectives with this revived dialogue initiative?

Today, locals living in the south-east Gomel region in Belarus say that there are no large incoming deliveries of military hardware.

Sometimes there are single pieces of military hardware near hotels, cafes or shopping centres, but mostly the Russian military transports have been reduced to damaged equipment being taken out of Belarus for repairs. While it’s possible that some aircraft may remain, people in general have seen no Russian helicopters or aircraft on Belarusian airfields.

Early estimates from independent Belarusian media this week said that 85% of the Russian military equipment that was withdrawn from the Kyiv region into Belarus may have left the country, although this information is still unverifiable.

However, Russia is still very much active in Belarus and Ukrainian intelligence reports that a Russian electronic warfare battalion is building posts for radio interference in Belarus. Moreover, there is still a threat of air and missile strikes on both civilian and military targets in Ukraine from the territory of Belarus.

The people living in the Gomel region are also still not allowed to go into the forests, and rumours say that this is due to Russian weapons and ammunition caches still being spread out across these areas.

The local authorities have even told the locals to report any findings of weapons, ammunitions or explosives and that failure to do so will lead to prosecution. Why these caches have not been removed, or why the Russian troops have forgotten where they are, is unclear.

Belarusian propaganda and a revived initiative

Since the Bucha massacre was uncovered Lukashenko has called the Ukrainian and western war crimes accusations against Russia fake, and has instead claimed that the British did it.

However, Lukashenko has still maintained his emphasis on peace, which independent analysts noticed in late March.

In his official Easter address he urged his neighbours to “live in peace,” something which Ukrainian media outlets found ironic since Lukashenko has allowed Russia to attack Ukraine from Belarusian territory.

This change in rhetoric towards peace talks is likely the result of the war in Ukraine not going as predicted, and some Belarusian analysts think that there is noticeable confusion among the officials in Minsk.

Since March, there has been four signs which could show that Minsk wants to de-escalate its tensions with the West.

First, in March, the head of the Polish Union in Belarus was released from prison, something which Poland has wanted for a long time. Secondly, Belarus’ State Border Committee announced that Latvian and Lithuanian citizens would be allowed to enter Belarus visa-free for a month between April and May. Thirdly, the state Belarusian media bragged about the fact that the migration centre which hosted migrants from last year’s border crisis between the EU and Belarus was empty.

Fourthly, it recently became known that Belarusian Foreign Affairs Minister Vladimir Makei had sent out a letter to the EU and certain selected EU countries saying that Minsk was ready to resume negotiations.

According to Ukraine’s President Zelenskiy’s presidential advisor Oleksiy Arestovych, Lukashenko is also in fact already engaged in separate negotiations with the West.

When Russia’s invasion first began, Lukashenko probably thought that the war would be over fast and that he would be handsomely rewarded by Putin and receive favourable trade deals with the new Russian-loyal regime that would be installed in Kyiv.

Things did not go as planned, and now he’s even more internationally isolated than he was before, sanctions pressures have increased immensely and Russia has enough of its own economic problems to worry about, never mind giving him any extensive help right now.

Moreover, Lukashenko seems unhappy with being viewed as a Russian vassal without any possibility of taking decisions on his own. This is a status which he acquired as soon as he let Russia attack Ukraine from Belarusian territory.

While at the same time refusing to admit that Belarus has been an active party to Russia's invasion, he’s demanded that Belarus also receives a spot at the table of the Russian-Ukrainian peace negotiations, which would make him a de facto participant in the war.

The strategy which Lukashenko has had since 2020 of tying himself closer to Putin and simultaneously building relations with the West doesn’t work anymore; and despite having burnt all the bridge with the West and Ukraine, Lukashenko hopes to be forgiven by simply adopting a rhetoric of “peace” and sending subtle signals hoping that the West will bite.

Lukashenko is hoping that the West will think that it’s better to pull him out of the arms of Putin than to isolate him. The only problem for Lukashenko with moving closer to the West is that he still needs Putin, and Putin is not likely to let him off the hook so easily.

Turkey accuses West of waging ‘psychological warfare’ to wreck its tourism industry
RBI's 2022 profits soar to €3.6bn, with Russian operations representing more than half
Belarus faces new sanctions by the EU and asset seizures by Ukraine