10,000 people demonstrate against the Steinmeier plan in Kyiv 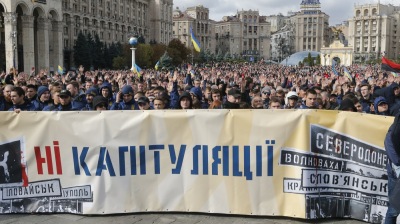 Some 10,000 people gathered on Maidan square in Kyiv to protest against president Zelenskiy's decision to sign off on the Steinmeier Formula deal to bring an end to the conflict in Donbas
By Ben Aris in Berlin October 7, 2019

The formula put forward by former German foreign minister Frank-Walter Steinmeier in 2015 suggested the introduction of special temporary local self-government rule in some areas of the Donetsk and Luhansk regions during local elections in Donbas that becomes permanent if the OSCE judges the elections free and fair.

It shortcuts some steps in the Minsk II protocol that has been the main working agreement designed to bring the conflict in Ukraine's eastern regions to an end. Moscow insisted that Kyiv sign off on the Steinmeier formula before any new Normandy format meetings could be held.

However, there are those in Ukraine that fear the deal will lead to Ukraine losing control over its territory. Demonstrators shouted “no capitulation” during the rally – the largest on the square since the 2014 demonstrations that kicked off the “revolution of dignity” that ended with a change of government after former president Viktor Yanukovych fled the country.

Commentators pointed to the size of the rally as a warning sign for Zelenskiy and suggested that he was going to run into trouble. However, Zelenskiy's office dismissed the demonstration as insignificant. The head of the presidential administration Andriy Bohdan claimed that the demonstrators were paid for by Zelenskiy's political opponents.

Former president Petro Poroshenko was one of those that attended and spoke to the crowd and he has taken an extreme position, refusing any cooperation with Russia. Poroshenko took the belligerent line that the only realistic solution is to persuade the west to commit military support and force the Russian-backed rebels and regular Russian troops out of Ukraine by force. While the Russian side has dragged its heels on implementing Minsk II, Poroshenko also failed to fulfill many of its conditions such as holding elections in the region and making constitutional changes required by the document, ending in a stalemate.

Zelenskiy defeated Poroshenko in every region in the recent elections, except Lviv, but Poroshenko still represents a nationalistic core of supporters that do not want to see any compromise with Russia in the peace negotiations.

There was also a strong contingent of far-right nationalists at the rally from the Azov brigade and the neo-nazi C14 organization, according to reports. Poroshenko openly wooed these far right groups during his administration and the state has granted them money to help with the “education of the youth” as well as co-opting members of the paramilitary group into the army. While the right wing groups did not carry banners or posters they did engage in chants that are associated with the far-right and were easily identifiable.

“The far-right presence was low-key in terms of symbolism, no flags, few uniforms, ect. But, most striking to me was that the organisers got the crowd to shout "Glory to the Nation / Death to the enemies / Ukraine above all," a slogan usually limited to far-right events,” bne IntelliNews contributor Fabrice Deprez reported from the demonstration. “Other things I noted on far-right presence at this rally: Both Azov and Svoboda were present, notably the youth movements of both organisations. Seems the two groups, which are often rivals, found a cause around which to ally.”

There were demonstrations in other cities, but these were much smaller. Over 1,000 people gathered in the Black Sea port city of Maripol that is only a short drive from the conflict zone, but only 300 people turned out for a demonstration in Kharkiv, Ukraine’s second largest city.

While there is clearly a committed opposition to Zelenskiy's peace plans, he was swept into office in April taking 73% of the vote on the promise of ending the war in the east, which topped all the polls as the issue that Ukrainians are most concerned about. Zelenskiy was then confirmed by a similar landslide victory for his party in the parliamentary elections in July.

“Do we want the end of the war and the return of all Ukrainian territories? Yes. There is one platform where these issues can be discussed at the highest level - the Normandy format. The Steinmeier Formula was the only obstacle to organise it,” Zelenskiy said in a statement on October 3 after the deal was signed.

“Does it imply that Ukraine recognises the annexation of Crimea and renounces Donbas? No. Does it imply that elections in Donbas will be held tomorrow at the barrel of machine guns? No… This formula means only one thing - when the so-called law on the special status of Donbas should start working. Namely, after the local elections there, which will be held under the Constitution of Ukraine, the legislation of Ukraine, and after the publication of the OSCE report that the elections were held in accordance with international democratic standards,” Zelenskiy added.

The demonstrations at the weekend show there is an organised and vocal opposition to compromise with Russia in the upcoming Normandy talks, but with Zelenskiy's popularity still rising and now in the 70s he still has the popular mandate to try and reach a deal with Russia.

However, in earlier remarks Zelenskiy set conditions for the elections: all rebel combatants must withdraw; the elections must be held under Ukrainian law; and the state must take back control of the Ukrainian-Russian boarder before elections can proceed. However, within these broad brushstrokes demands much of the detail is missing, which will be the subject of the upcoming Normandy meeting with Russia.

The demonstration, dubbed the “No Capitulation” protest, is the latest in a series of protests throughout the country that were ignited on October 1, the day Zelenskiy announced he had signed off on the Steinmeier deal. Zelenskiy responded to critics on October 3 with a video posted on social media, his preferred means of communicating with the public, where he promised that, "I will never surrender Ukraine.”

On the evening of the demonstrations Bohdan followed on claims that the demonstration was orchestrated and not spontaneous, by reposting alleged screenshots of money being offered to those willing to protest on Facebook. In response, protest leaders added to their list of demands of the president that Bohdan resign.

“This person is provoking now a civil conflict with such posts,” protests leaders said, as reported by the hromadske.ua news site.

The deal has also been negatively received by various city governments that have come out to publically oppose it. The Khmelnytskiy Regional Council, Kropyvnytskiy City Council and Sumy City Council were the latest local bodies approving statements on October 4 calling for caution in implementing the Steinmeier formula, or in some cases outright opposing it.