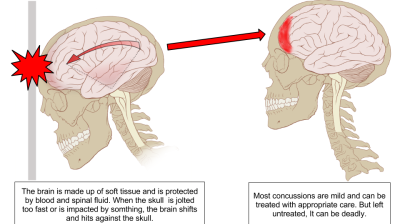 A concussion is a traumatic brain injury that changes the way your brain functions. There can be tearing of blood vessels and damage to nerves.
By bne IntelliNews February 11, 2020

It seems unlikely that a war this year with Iran would play to Donald Trump’s electoral advantage and with the number of US service members that suffered traumatic brain injuries (TBI) in the wake of the January 8 Iranian missile attack in Iraq now given as 109 Washington has been served a reminder that a serious conflict would not be casualty-free.

Iran targeted the al Asad military base in retaliation for the US drone assassination of second most powerful Iranian official Major General Qasem Soleimani on January 3 at Baghdad airport. The US troops stationed there had sufficient advance warning to allow them to take cover and initially Trump declared that there were no casualties resulting from the strike. However, Pentagon officials subsequently announced that there were TBI. The total was given as 64 at the end of January but the latest statement from defence officials confirms 109 cases. However, nearly 70% of the injured service members have returned to duty. For the most part, the TBI are said to be “mild”, or mTBI.

Approximately 200 people who were in the blast zone at the time of the attack have been screened for symptoms.

During a news conference at the Pentagon late last month, US Joint Chiefs Chairman Gen. Mark Milley said the increasing number of reported cases was partly because symptoms of mTBI take time to manifest.

Last month, Trump remarked that he did not consider the potential brain injuries to be as serious as physical combat wounds.

During the World Economic Forum in Davos, Switzerland, in January he was asked to explain his previous comments that no US service member was harmed by the Iranian raid. "No, I heard that they had headaches, and a couple of other things, but I would say, and I can report, it's not very serious," Trump replied during a news conference.

The Veterans of Foreign Wars of the US (VFW) group has demanded Trump apologise for his comments.

"The VFW expects an apology from the President to our service men and women for his misguided remarks," William "Doc" Schmitz, VFW national commander said on February 7. "And, we ask that he and the White House join with us in our efforts to educate Americans of the dangers TBI has on these heroes as they protect our great nation in these trying times. Our warriors require our full support more than ever in this challenging environment," he added.

The US Centers for Disease Control and Prevention defines a TBI as a "disruption in the normal function of the brain" typically caused by a bump, a blow or a jolt to the head. One of the most common forms of mTBI is concussion.

The US on September 21 imposed sanctions on 27 individuals and entities involved in Iran’s nuclear development, ballistic missile and conventional weapons programmes as it pushed ahead with its ... more