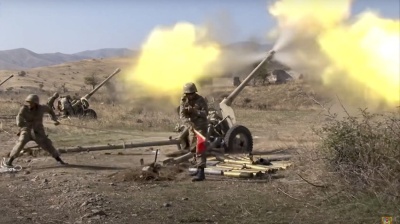 The 25th day of the Nagorno-Karabakh conflict brought little to no sign that the leaders of Armenia and Azerbaijan believe they might soon find a path to a ceasefire that can hold or peace.

Armenian Prime Minister Nikol Pashinian told the nation he perceived no possibility of a diplomatic solution to the conflict over the enclave. "We have to realise that the Karabakh question, at least at this stage and for a very long time, cannot have a diplomatic solution," Pashinian said during a speech broadcast on Facebook Live on October 21. "Everything that is diplomatically acceptable to the Armenian side... is not acceptable to Azerbaijan anymore," he said. Pashinian also urged Armenians to "take up arms and defend the Motherland".

For his part, Azerbaijan’s President Ilham Aliyev reiterated that he foresaw a military resolution to the crisis. Azerbaijani forces, he said, would drive Armenians "out of our lands".

The rhetoric flowed as Armenia’s President Armen Sarkisian visited Brussels for talks with the European Union and Nato. The Azerbaijani and Armenian foreign ministers were in Moscow for consultations with Russia. They are scheduled to meet US Secretary of State Mike Pompeo in Washington on October 23.

The mountainous enclave of Nagorno-Karabakh has for three decades been controlled by ethnic Armenians as a self-proclaimed republic, but it remains internationally recognised as part of Azerbaijan.

Eurasianet on October 21 reported that “Azerbaijan’s armed forces are continuing to advance deeper into previously Armenian-held territory, raising the prospects of an offensive into the heavily populated core of Nagorno-Karabakh itself”. Azerbaijan, it added, has recently pushed into several additional regions to the south of Nagorno-Karabakh, an area wedged between Armenia and Iran. It was clear, the publication said, “that developments on the battlefield are driving events far more strongly than anything agreed over the negotiation table”.

Speech from President Aliyev not only announces return of occupied territory, also vows "return of Karabakh." No talk of diplomacy or ceasefire. An Armenian village in NK given Azerbaijani name. World please take note: conflict is entering a more tragic and dangerous phase. https://t.co/Gj5JWGyEjT

Speech from President Aliyev not only announces return of occupied territory, also vows "return of Karabakh." No talk of diplomacy or ceasefire. An Armenian village in NK given Azerbaijani name. World please take note: conflict is entering a more tragic and dangerous phase. https://t.co/Gj5JWGyEjT

In an October 16 interview with Turkish television, Aliyev said that “without Shusha our cause will be unfinished”. Shusha, observed Eurasianet, is the city that Azerbaijanis consider the Azerbaijani cultural heart of Karabakh, and it is less than 10 miles from the de facto capital, Stepanakert. (Armenians spell the name of the city Shushi.)

Turkey remains a bellicose backer of Azerbaijan in the conflict. In comments to Azerbaijan’s parliament, Turkish Speaker of Parliament Mustafa Sentop said Armenia was the aggressor and criticised mediation attempts by Paris, Moscow and Washington, which in nearly 30 years, working through the OSCE Minsk Group, have not found a solution to the Nagorno-Karabakh question.

“If they are sincere on their path to peace, those who have held Armenia’s leash and supported it for years need to end this dangerous game now and stop supporting Armenia. Azerbaijan does not have another 30 years to wait,” Sentop said. The Minsk Group, he added, “is brain dead”.

On October 20, UEFA’s executive committee decided that UEFA club and national team football competitions will not take place in Armenia and Azerbaijan until further notice because of the continuing conflict.  Clubs from both nations will have to find alternative venues for their next UEFA competition matches to be played at home.