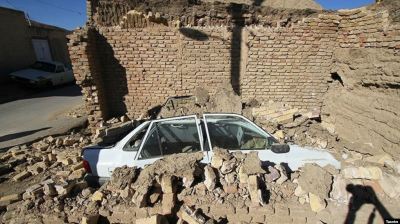 Iran suffers from several temblors annually, however, in recent months seismic activity in the country has increased with several quakes occurring in the west of the country in the majority Kurdish areas.

USGS, the US monitoring system, confirmed the quake some 28km from Masjed Soleyman, at a depth of 10 kilometres underground. The quake struck early on July 8 at just after 7:00 am, the USGS noted.

The area where the quake occurred is sparsely inhabited, however, it is also home to several manmade lakes including the Karun Dam Lake.

In November 2017, a 7.3-magnitude quake struck villages and towns in Kermanshah province, along the mountainous border with Iraq, killing at least 530 people and injuring more than 12,000 in the middle of the night. Entire districts of towns were wrecked. It was recorded as Iran’s deadliest earthquake in more than a decade.

US ‘has knee on Iran’s neck’ says Russia at UN

Russia’s UN Ambassador Vassily Nebenzia on June 30 accused the US at the UN Security Council of pursuing foreign policy against Iran in a way that was “like putting a knee to one’s neck” as ... more

The French foreign minister on June 24 called on France’s European Union partners to hold urgent talks on the bloc’s future relations with Turkey. Paris and Ankara have this week exchanged tense ... more