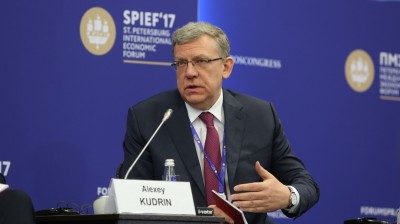 Audit Chamber Director Alexei Kudrin is responsible for creating a new economic model for Russia and ending corruption plays an important role in his plans
By bne IntelliNews January 14, 2020

"Concerning criminal cases, RUB2bn-3bn per year is the maximum, usually it’s even less," Kudrin said, adding that spending violations are estimated at hundreds of billions per year.

The value of the Russian economy was $1.657 trillion in 2019 making the stealing equivalent to 1.9%-2.9% of GDP. However, one in three Russians were estimated to be working in the shadow economy in October 2019, down 45% from two years ago, or about 13% of GDP, according to a controversial study from the Russian Presidential Academy of National Economy and Public Administration (RANEPA). Other estimates put the share as high as a third of GDP.

While corruption and the shadow economy are not directly comparable, the two problems are linked as both are dependent on good corporate governance.

"For instance, we’ve detected RUB804bn of such violations in 2019,” Kudrin said a government briefing. “But about a third of them are accounting errors. They are corrected at the time of checks. A third is violation of procurement proceedings, which are not criminally liable," Kudrin said as cited by Prime.

Since the near-miss budget crisis in 2016 when the Ministry of Finance had a RUB2 trillion hole in the budget the government has been cracking down on graft as part of its quest to find new sources of revenue, and this has greatly reduced corruption. However, by definition measuring graft is impossible to do accurately and all the estimates remain controversial.

Moreover, much of the “stealing” is legal. The Kremlin introduced an online procurement system several years ago, later copied by Ukraine with its ProZorro system, that was supposed to open up tendering for state contracts to competition and make them more transparent.

However, the biggest abuser of the special exemptions for one-bid awards of these contracts is the Kremlin, and they tend to be awarded to the very largest contracts. Under President Vladimir Putin a group of stoligarchs have grown enormously wealthy by winning these contracts that include projects like the Kerch bridge to Crimea and the Power of Siberia gas pipeline to China, both of which cost billions of dollars.