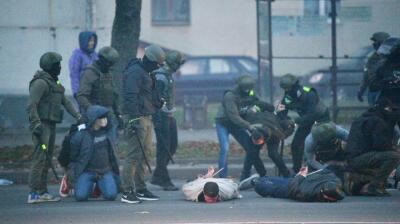 Among those caught up in the police action on November 9 was the winner of the Miss Belarus contest in 2008, Olga Khizhinkova, who joined the march carrying red and white flowers
By bne IntelliNews November 9, 2020

Belarusian police arrested a record 1,000 protesters at the traditional Sunday demonstrations on November 9 calling for the resignation of incumbent President Alexander Lukashenko.

Most of the arrests happened in Minsk, but people were also detained across the country in parallel local protests at Vitebsk, Grodno, Gomel, Bereza, Pinsk, Zhlobin, Bobruisk, Lyakhovichi, Mogilev, reports Pravda, the human rights NGO Viasna reports, which is tracking the detentions.

Among those caught up in the police action was the winner of the Miss Belarus contest in 2008, Olga Khizhinkova, who was pictured on the streets of Minsk holding a bouquet of yellow and white flowers. 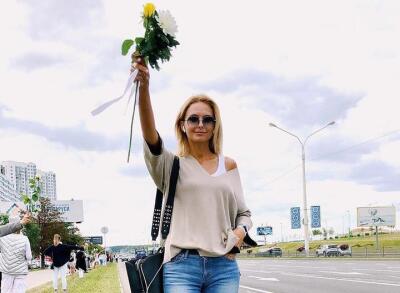 Well-known Belarusian sportsmen were also detained, including the silver medalist of the 2008 Olympic Games in the decathlon, Andrei Kravchenko, and the multiple champion of Belarus in kickboxing and Thai boxing, Ivan Ganin.

The largest number of those arrested was in the evening of the presidential elections on August 9 when over 3,000 were detained.

The first three days saw the mass arrests continue with 2,000 arrested the next day and 1,000 the day after. At the end of the first week the government backed off and scaled back the number of arrests as detention centres began to overflow and detainees were held in appalling conditions causing widespread outrage that fuelled more protests and strikes.

In recent weeks the number detained on Sundays have fallen to a few hundred, but on November 9 arrests soared as the Lukashenko regime takes advantage of the falling number of participants and can better manage with the smaller crowd sizes. The Sunday protests have attracted more than 100,000 marchers every week for the last three months, but in the last two mass demonstrations the numbers on the street have fallen below 100,000 for the first time.

The protests came to a head on October when opposition leader Svetlana Tikhanovskaya gave Lukashenko the “People’s Ultimatum”, demanding he resign or face a general strike. A record 200,000 protesters came out on to the streets of Minsk in a show of unity for that march, but in the week that followed the opposition failed to deliver a hammer blow to the current regime as factory workers, fearing for their livelihoods and facing coercion by the state, largely failed to come out on strike.

The numbers at the subsequent rallies have fallen since as the policing of them has become more brutal. Whereas the police and OMON riot police were simply brushed aside by the huge crowds at the weekly demonstrations that swamped their limited resources, as the numbers at the weekly protests fall the crowd sizes have become more manageable and the regime has ramped up its aggression in an effort to break the back of the opposition movement.

The numbers at this weekend’s protest are hard quantify, but were down to a few tens of thousands and concentrated in the neighbourhoods of the capital while the police controlled the centre of the city.

Groups of OMON roamed the streets grabbing protesters and bundling them into vans. There were several incidents of brutality caught on camera. In one case an old man with white hair and a cast on his hand was arrested by a group of OMON officers who wrestled him to the ground, where he was repeated beaten with truncheons.

In another incident detainees were held in the yard of a police office and made to stand with their faces against the wall for 11 hours, according to video reports by the local news outlet Nash Niva, reporting on eyewitness accounts from neighbouring buildings. It is unknown when the detainees in the yard were released or removed, as police broke into the apartment of the couple filming the detainees in the yard and arrested them.

A total of 17,000 people have been arrested since the beginning of the protests immediately after the disputed August 9 presidential elections, although many of those have since been released. However, almost all of the opposition leaders that didn't flee the country are currently in jail facing charges of inciting a riot, sedition and treason in some cases.

The number arrested has been building up, with less than 200 arrested in the previous weekend march, so the 1,000 detained on November 8 rally represents a significant scaling up of the police’s crackdown on the demonstrations.