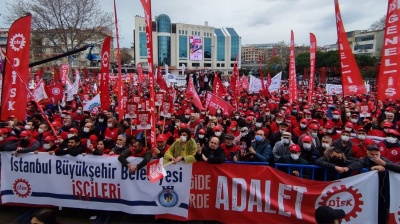 A law professor seen as close to President Recep Tayyip Erdogan has suggested that Turkey "should be prepared for a state of emergency due to the economic crisis" besetting the country.

The academic, Izzet Ozgenc, who has caused a stir by posting a series of comments on Twitter, is a member of the Turkish Academy of Sciences (TUBA), an agency affiliated with the Ministry of Industry.

"We should be prepared for the declaration of a state of emergency (as per article 199 of the Constitution) because of the seemingly inevitable grave economic depression," Ozgenc wrote on December 13 as the Turkish lira (TRY) continued to crash on the FX market.

Although Ozget later apologised, saying his statement was "misunderstood" and that he had merely "expressed concerns," the debate over whether emergency powers could be used continues, according to bianet.

For ordinary Turks, as well as industry and businesses in Turkey, the economic situation has become something of a catastrophe, with lengthening lines of people queuing for discount bread handed out by municipalities, consumer goods merchants unwilling to sell products for fear of accepting a price that could be vastly exceeded the very next day due to further lira depreciation and the value of wages decimated. The lira, at very nearly 15/$, has more or less halved in value versus the dollar since the start of the year, but Erdogan continues his so-called “economic war of independence”, urging more interest rate cuts (the central bank will today, December 16, announce the latest rates decision) despite rampant inflation and markets horrified at the sight of monetary policy being run from the palace.

Among opposition leaders who reacted to the professor’s statements was Meral Aksener, leader of the opposition IYI (“Good”) Party. She said a state-of-emergency intervention should never be used in such a situation as it would cause the country to go bankrupt.

Economist and writer Mustafa Sonmez spoke to bianet about the issue. He observed: "Citizens have a severe and deep distrust of the government. There is rising inflation. In the face of this, people convert their savings in the Turkish lira to foreign currencies to protect what they have. There are no legal obstacles to this. Banks and foreign exchange offices make the transactions. This is a pretty legal and legitimate framework. How will you prevent this with a state of emergency?"

"Preventing this means abolishing foreign exchange regimes and international conventions in a very radical way. There is no need to declare a state of emergency for this," he added.

Even without the application of an emergency regime, the government could restrict foreign exchange transactions and close foreign exchange outlets, but “none of these [moves] is a remedy, either”, said Sonmez.

He continued: "The way out of the current situation of Turkey is not practices like a state of emergency but to take steps to regain the trust of the people. For this, you should strengthen the lira. In other words, the central bank should provide more interest for the lira, it should increase interest rates.

"If the government refrains from this, then it should hold elections. It should ask the people for a declaration of will once again. This is what Turkey needs right now, if you ask me.

"If a state of emergency is discussed instead of elections, this is not related to the economy. It would serve other purposes. It would set up a framework to restrict freedom of expression, maybe to prepare for a sudden and unjust election. And this is not what Turkey needs right now."

Even rumours of a state of emergency caused further lira depreciation, said Sonmez, adding: "[One dollar] is nearly 15 lira. The central bank can't intervene [in the market] because it doesn't have any more reserves. What they show as the gross reserves consists of escrows, required reserves and swaps. The rest is the part of the foreign currencies that the banks collect from us, which the banks keep at the central bank. Since December, the central bank has been spending this money, but there is a problem that they need to put it back. This is a practice that reduces net reserves to negative. They must have realised that this is not working as they haven't [intervened in the market] since yesterday [December 14]."

Sonmez noted that 65% of deposits in Turkey’s banks were now FX and that those people who have not yet converted their lira into hard currencies regret the fact.

"There is no positive atmosphere that would dissuade those who buy foreign currencies. On the contrary, there is a negative atmosphere. The decision made by the Fed today will strengthen the dollar [further] as well. And if the central bank reduces interest rates again, the distrust will be reinforced.

"More crucially, the inflation rate for December will be announced on January 3. It is possible that the monthly inflation rate will be 10% and the annual rate will be about 31%. In the coming months, it will increase by 10% percent monthly. The increasing inflation will crush the minimum wage.

"Then the government will borrow more from the Treasury. [There will be] more [of a] Treasury deficit... This will lead to other anomalies and things will be even harder to manage.

"The people's and the opposition's efforts [to bring about] an early election will determine everything. The government can't escape this [demand for an early election], which would be the right thing to do. Turkey can't overcome these issues without an election."

On December 15, hundreds of health workers gathered in Istanbul and called on the government to resign as they mounted a one-day strike over poor wages and harsh working conditions amid the ongoing meltdown of the lira.

Kemal Kilicdaroglu, leader of the main Republican People’s Party (CHP), on December 14 called on the Erdogan administration to link the minimum wage to the dollar. Warning that “there will be a food crisis in the country in coming days”, he said: “Turkey cannot be governed, it is drifting away. The minimum wage will be determined in the days ahead. This is the lowest wage with which a family can make ends meet. The net minimum wage in January of this year was 2,825 lira, which was 384 dollars when calculated according to the then current exchange rate [by the early hours of December 16 it was worth $191]. As you know, they say, 'Turkey is at full gallop.' If they are to determine the new minimum wage, they should pay the equivalent of 384 dollars in Turkish lira.”

The president’s measures were designed to lead Turkey to economic independence, said Oktay, and the administration’s economic programme was already beginning to bear fruit, with a $3.2bn current account surplus in October, the highest monthly surplus in three years.

Previously, said Oktay, such surpluses had preceded economic crises, but this time around things would be different as the the government’s goal was to render the surpluses sustainable and permanent.