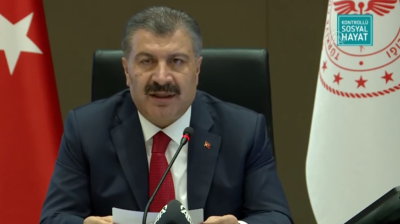 Koca at his weekly news conference offering his explanation of the coronavirus data.
By bne IntelIiNews September 30, 2020

An opposition MP on September 30 claimed Turkey’s daily number of new coronavirus (COVID-19) infections is running at 19 times the figure presented by officials after gaining access to a screenshot of the Turkish health ministry’s official laboratory results portal, which is inaccessible to the public.

Murat Emir, a lawmaker of the main Republican People’s Party (CHP), said that the Laboratories Information Management System data showed that nationwide on September 10 there were 29,377 positive coronavirus test results, out of a total of 107,702 tests administered. Yet on that day, Turkey officially recorded just 1,512 new COVID-19 cases.

In a video broadcast by Fox Haber, Emir called on Minister of Health Fahrettin Koca to “tell our people the truth already”.

“The first rule of fighting a pandemic is to give correct information to our people,” Emir added in a tweet.

Several publications including bne IntelliNews have for months run reports of medics and local officials pointing out that when compared to coronavirus cases held for a single town or city, the national data appeared to present a massive under-estimation of the extent of the coronavirus outbreak in Turkey.

Following Emir’s revelation, Koca at his weekly news conference appeared to acknowledge that the government does not publish the full number of daily positive COVID-19 cases, but only cases in which the people concerned were symptomatic, Reuters reported. The number of daily new COVID-19 “patients,” which he defined as those who are symptomatic, was more important than the number of new “cases,” which includes those who do not show symptoms, he argued.

“Not all cases are patients because there are those who show no symptoms at all even though their tests come back positive. These create the vast majority,” he said.

Koca also claimed his ministry did not have the kind of interface that Emir said the screenshot was from and that the document, which he said was undated, showed the wrong number of tests conducted on the day to which Emir claimed it referred.

“I want to say that all the information on the [coronavirus] table we give is correct,” Koca said.

Turkey, a country of 83mn that has been experiencing a resurgence of the coronavirus in recent weeks, officially recorded 1,391 new COVID-19 cases on September 30 to make an overall total of 318,663. It also registered 65 more deaths from the virus, making an overall total of 8,195. Sceptics might argue you should multiply those figures by around 20 to get the true picture.