Adria Airways files for bankruptcy after cancelling all flights 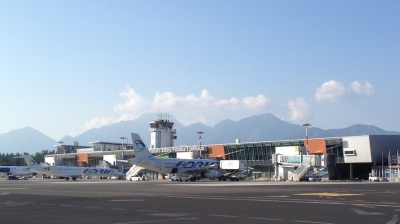 By Valentina Dimitrievska in Skopje October 1, 2019

Slovenian flag air carrier Adria Airways filed for bankruptcy on September 30 as it was unable to solve financial problems which grounded all its flights, it said.

According to media reports, Adria Airways has debts of €90mn. Adria Airways is owned by AA International Aviation Holding, a subsidiary of the German fund 4K Invest, since 2016. The management has been criticised for some time over sudden flight cancellations and delays.

In the European aviation industry, this is the third company to enter bankruptcy within a week, along with British chapter airline operator Thomas Cook and French air carrier XL Airways.

"The court in Kranj has a three-day period to decide on the opening of bankruptcy proceedings," the airline said in a statement on September 30.

Adria Airways also announced it had cancelled all scheduled flights due to the launch of bankruptcy proceedings.

The decision took place after Slovenia’s aviation agency gave a deadline of October 2 for the airline company to submit a financial restructuring plan, warning that otherwise it will revoke its operating license.

Earlier on September 30, Economy Minister Zdravko Pocivalsek said that the financial hole in the company is much larger than expected and that bankruptcy is the likely option.

As a new step, the government plans to establish a new state-run company to improve the international connectivity of the country, which could happen within a few months.

Pocivalsek said that the authorities are in talks with Germany’s Lufthansa and the owner of Ljubljana airport, Fraport, about the possibility of transferring half of Adria Airways’ flights.

Meanwhile, Slovenia's Market Inspectorate criticised Adria Airways for selling tickets for flights that the company could not conduct and fined the company twice for such a practice.