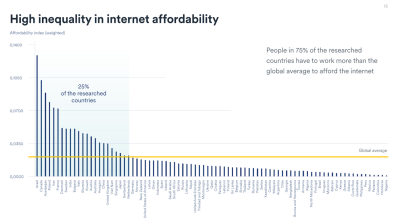 Albania is among the countries that have the least affordable internet in the world, online security specialist Surf Shark said in its Digital Quality of Life Index 2020 report.

The internet affordability measures how much time people need to work to be able to afford an internet connection.

People in 75% of the researched countries have to work more than the global average, including Albania which is near the bottom, though the situation is worst Nigeria, and internet is also relatively more costly in several Latin American countries.

North Macedonia is only nine places ahead of Albania, but behind Montenegro, Serbia and Bosnia & Herzegovina, all of which are below the world average.

Despite this, the Balkan countries, including Albania, Serbia, Croatia and Bulgaria had surprisingly high quality internet, despite having lower e-infrastructure, as they all scored above average in this area. 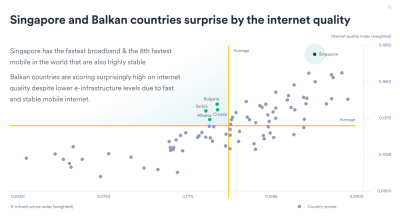 In the wider region, Bulgaria and Slovenia are among the 25% of researched countries that have to work less than the global average to afford internet.

In terms of electronic security, the index showed that North Macedonia is slightly below the index average and ranks the best among the Western Balkan countries, followed by Serbia, Montenegro, Albania and Bosnia.