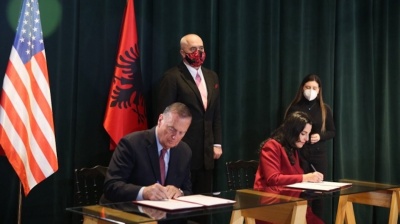 Albanian PM Edi Rama at the signing of a cybersecurity agreement with Jones International. / kryeministria.al
By bne IntelliNews January 11, 2022

The Albanian government has agreed to hire US-based Jones International to improve its cybersecurity after a serious data leak involving thousands of people’s personal and salary information.

Personal and salary data for 637,138 Albanian citizens, over one-fifth of the country’s population, was leaked online at the end of December. The data breach followed another massive leak of personal data ahead of the April 25, 2021 general election to the ruling Socialist Party, raising serious concerns about the security of Albanians’ personal data.

Prosecutors are investigating the leak, but in the meantime Tirana has signed an agreement with Jones, headed by retired general and former White House national security adviser James Logan Jones, to strengthen the security of digital systems in the country, a government statement said.

There are also plans to set up a National Cyber ​​Defence Centre, which will also be useful for Nato, of which Albania is a member, Prime Minister Edi Rama said at the signing ceremony.

“Recently we had a serious event, the leak of some personal data related to the salaries of employees in the Republic of Albania, an event that has happened in all the most developed countries, but that also gives us a lesson that it is not only anonymous cyber-attacks from which we must be protected, but also attacks from within, by infiltrators,” the prime minister added.

A media storm erupted in Albania when videos on Tik Tok showed Enkelejda Kapedani posing in designer clothes in her office and driving a BMW.

JV with 4iG aims to develop digital combat system solutions as well as ground and flight simulation systems for the provision of the most modern soldier training.

Small panels weaved on to a shirt or coat could mean never having to bother with a charger.