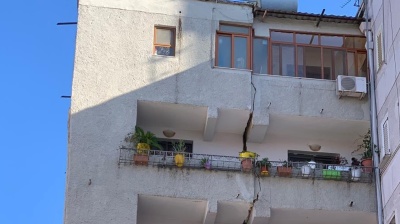 A strong earthquake measuring 5.8 on the Richter scale hit Albania on September 21, but no deaths were reported.

The authorities said it was the most powerful earthquake in Albania in the last 30 years.

The epicentre of the earthquake was registered in the Adriatic Sea 30 km north of the coastal city of Durres and 35 km west of the capital Tirana. The initial tremor was followed by several aftershocks with lower intensity. As of the morning of September 22, nearly 300 aftershocks had been recorded, following the big quake on Saturday.

At least 132 people were treated in hospitals, most of them with slight injuries, as people were hurt fleeing their homes in panic, the defence ministry announced on September 22.

The earthquake caused material damage mostly in Durres and Tirana, with large cracks appearing on the walls of buildings.

In Durres 42 houses and four apartments were damaged, while in Tirana there were wall cracks in 46 houses and three apartments, according to preliminary reports.

According to the defence ministry, tents have been set up for those who had to leave their homes at two locations in Tirana and Durres.

The earthquake was felt in neighbouring North Macedonia and Montenegro, and across the Adriatic sea in Italy.

Albanian Prime Minister Edi Rama canceled his trip to the UN annual meeting in New York due to the earthquake.

“Every family affected by the earthquake, today must have a human, direct contact with us,” Rama posted on his Facebook page during his visit to Durres.

The defence ministry announced that an emergency fund has been set up to help those affected by the earthquake.

Serbian government caps prices of basic foodstuffs as inflation soars
5 hours ago
Last Iraqi Airline flights evacuate migrants from Belarus as crisis winds down
20 hours ago
45.6% of Montenegrins think their country is going in the wrong direction
20 hours ago
Employees of Croatia’s Rimac Automobili attacked by racists in Zagreb
1 day ago
Russia, China slam selective invitations to US “Summit for Democracy,” call US hegemony in international politics “anti-democratic”
1 day ago