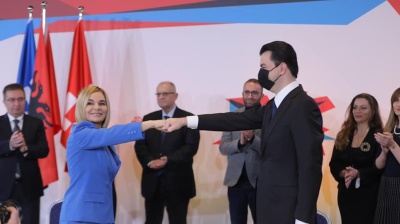 Albania’s two main opposition parties, the Democratic Party and the Socialist Movement for Integration (LSI), have signed a co-operation agreement ahead of the April 25 general election.

The two parties are hoping that working together will give them a better chance of ousting the Socialist Party that has already been in power for two terms under PM Edi Rama.

The agreement signed on March 1 sets out 13 priorities that the Democrats and LSI will carry out should they win the upcoming election.

They will run on separate lists, but will field a single list in districts with a lower number of voters.

“Today we joined forces, safe to bring change to Albania. On April 25th we promise that Rama will leave and we will start working for the citizens of Albania!” said Democratic Party leader Lulzim Basha.

“We joined to ensure change in Albania and we will bring that change: new hopes for everyone and serious work plans in all areas, where Rama has failed for eight years: economy, health, education, emigration, infrastructure,” said Gazment Bardhi of the Democratic Party.

LSI leader Monika Kryemadhi said the two parties were working together, even though her party is a local democratic party and the Democratic Party is right wing, in order to oust the Socialists. “At times we may have opposing [views on] certain policies, but we vow to find the common language of co-operation and work hard with each other, always putting forward the interest of Albania and Albanians,” Kryemadhi said in a Facebook post.

“Our partnership sends a strong and clear signal to all Albanians that change is coming, that change is inevitable and that better days [are] ahead for Albanians wherever they live,” she added.

Combining the efforts of the Democrats and the LSI would put the united opposition virtually neck and neck with the Socialists. A Euronews Albania poll from late February put Rama’s Socialists on 39.9%, 9.3 points ahead of the Democrats, on 30.6%, while the LSI has the support of 9.1% of voters. The polls showed the Socialists’ lead over the Democrats had narrowed by around 4 points compared to the broadcaster’s previous poll published in January.