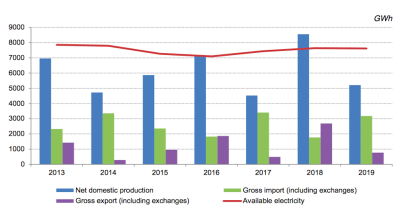 Net domestic production of electricity in Albania totalled 5,208 GWh in 2019 down by 39.1% from a year earlier, statistics institute data showed on March 5.

Albania is almost entirely dependent on hydropower for its electricity, and thus the amount of power produced can vary widely from one season to another depending on the weather. This has knock-on effects for the country’s GDP growth as when hydropower production is low, Albania is unable to export electricity and has to pay for imports instead.

Public hydropower plants accounted for 57.2 % of the total net domestic production, while independent power producers accounted for  42.3%, the institute said.

Albania is seeking to diversify away from hydropower to other renewable sources such as solar, but this is at an early stage. Other electricity producers from renewable sources generated just 0.5% of the total net domestic production.