Albania takes one step forward, two steps back towards the EU 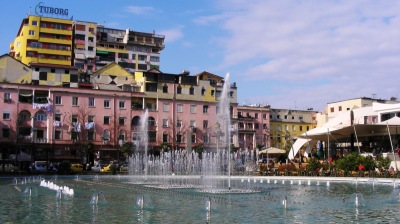 Albania is keen to join the EU, but its aspiration has been stymied by opposition from without and problems within
By Mark van Loon in Tirana February 27, 2020

After the recent news flow about Albania as an aspiring EU member and the refusal of some EU members (including France and the Netherlands) to start negotiations with Tirana because of the lack of required reforms, I travelled to Albania to see and hear for myself.

The country could certainly do with an injection of EU funds. But the EU club is weary of letting yet another eastern European country join before it is ready; it still needs to root out corruption, reform its institutions and adopt liberal western European values.

I asked Nora, my guide on a culinary trip in the city, what she thinks. She explained that the list of conditions Brussels has made and Albania should meet to start negotiations were ambitious, to say the least. Things have not improved, and with certain aspects things have even deteriorated.

In the June 2019 elections only one party, the Socialist Party (SP), participated. The opposition Democratic Party (DP) and Movement for Integration (LSI) boycotted the elections after a corruption scandal was revealed in which the SP was implicated. That lead to general discontent and even violent protests. The SP prime minister Edi Rama took advantage of the paralysis and pressed ahead with elections which obviously, his party won. Despite OSCE criticism on the process and a turnout of 23%, legitimacy doesn’t worry the current government.

Nora says corruption pervades the entire society. At universities, students pay professors to be allowed to participate in exams (and pay again if they fail the exam the first time), and female students who cannot pay are sometimes forced to trade sexual favours for good grades. One female student recorded a negotiation with a professor who tried to extract such a bribe and made it public. That sparked the recent student protests in Tirana.

In the healthcare sector, patients have to bring the proverbial brown envelopes stuffed with cash to get anything from simple consultations to medicines to operations.

In construction, one buys building licenses with complete disregard for cultural heritage or nature preservation with the result that beautiful old buildings are bulldozed to make way for concrete buildings and the countryside is scattered with the same monstrosities.

Sadly, young people are voting with their feet. Hundreds of thousands of people have left the country in recent years to join the sizable Albanian diaspora. The migration rate was 52% in 2018, according to research from the University of Sussex.

Blloku, the upmarket part of Tirana where the old villa of former dictator Enver Hoxha still stands, is where the money made by the elite is spent. Porsche, Mercedes, Audi, Maserati SUV’s are the norm here. Prices at the many elegant restaurants, hotel’s, cafe’s and trendy nightclubs are double or triple those in the rest of the city. One could imagine there would be an interest in keeping Albania out of the EU and maintain the cozy status quo.

Most of the population though craves stability and the rule of law. There is no real protection in functioning labour laws for workers from owners of private enterprises. Staff often work 6 days a week for a pittance with one or two weeks of holidays a year. And in case of a labour dispute it will be of little use to start a court case as obviously judges can be bought.

My guide admits Albania is not ready for the EU, and currently receives money from Brussels anyway to help with infrastructure. No surprise it is not always clear where the money ends up. She gives an example: in 2019 the EU sent €2mn to Tirana to buy and train rescue dogs in case of earthquakes but when one occurred later that year, there was not a single dog to be found. At least 21 people died in that event.

A violent history weights on the national psyche. The country has been invaded and occupied many times, fascist and communist rule were ruthless and the collapse of a nationwide pyramid scheme (two thirds of the population took part) in 1997 culminated in a civil war that pitted the South against the North. Criminal gangs occupied and ruled the country and even threatened the capital. Eventually a UN peacekeeping army had to save the country from complete collapse. That was only 20 years ago.

Deeply engrained into Albanian society is the Kanun, a set of traditional rules and customs how one should conduct oneself, what punishment is fair in case of non-compliance with these rules, and how it should be administered. The Kanun often supersedes Albanian law, Linda explains. It even applies to Albanians outside the country.

Nora left Albania to study in Bologna, where she was frowned upon by the Albanian student community for having international friends. Being Albanian and Muslim, she was subjected to racism in Italy. Having finished her study of photography and having some experience in this field, she applied for a work permit in the UK and although she met all conditions, this was denied without explanation. It is hard to evade the stigma of being Albanian.

Blood feuds are still widespread, especially outside the major cities. Killing or severely injuring a man, even accidentally, will result in a vengeance killing by the family of the victim, preferably killing of a young (male) member. As the ‘rules’ stipulate this has to be done outside the house of the perpetrator (as the home is protected by God) some people are destined to de facto life-long house arrest and isolation. This punishment can be inherited by the next generation of the perpetrator.

So all in all a few hurdles remain for Albania to earn the coveted EU membership. And given the nativist and populist backlash in some Easter European countries that where subjected to the loss of sovereignty EU membership entails, perhaps Brussels could think of a different kind of cooperation with the Balkan countries.

From enabling their employees to work from home to offering new e-commerce services, companies in Central and Southeast Europe are moving their operations online in response to the coronavirus pandemic and associated lockdowns.

Just how painful would a sovereign debt default be for Ukraine?

Officials do not explain why they are imposing such stringent internal restrictions if Turkmenistan is, as they insist, genuinely coronavirus-free.

With the predominance of oil and gas in Russia’s economy the pipe-making business is a big one. ChelPipe is the market leader and is now considering an IPO.

TURKEY INSIGHT: How bad a pandemic hit to GDP must country brace for?

Finance minister accused of just “dropping in from outer space” for sticking to his targets. Lira continues to crumble as analysts slash growth forecasts.

Coronavirus threat pushes businesses online
1 day ago
Just how painful would a sovereign debt default be for Ukraine?
5 days ago
Turkmenistan: Unjust deserts
6 days ago
Russian pipemaker ChelPipe getting ready for IPO
11 days ago
TURKEY INSIGHT: How bad a pandemic hit to GDP must country brace for?
8 days ago