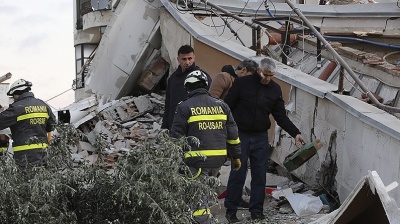 International search and rescue teams in the port city of Durres.
By Valentina Dimitrievska in Skopje December 2, 2019

Albanian Finance Minister Anila Denaj said that the budgets for 2019 and 2020 will be revised to allocate funds for reconstruction following recent devastating earthquake, local media reported on December 2.

The 6.4 magnitude earthquake that hit Albania on November 26 killed 51 people and damaged hundreds of buildings. The port city of Durres and the town of Thumane were the worst affected.

“We are revising the budgets for 2019 and 2020 from scratch. Some projects can be delayed by one year,” Denaj was cited by Albanian Daily News.

She said that there will be budget cuts in 2020 as funds allocated for specific projects will be spent on reconstruction of the damaged houses instead.

4,000 people lost their homes in the earthquake and are being accommodated in camps set up in a dozen cities in Albania.

The Albanian government decided to provide financial aid and new homes to families of the victims.

Meanwhile, Albania's Prime Minister Edi Rama has sought international financial aid and expert assistance saying that it is impossible for Albania to carry out the reconstruction alone.

US and EU civil engineers are working with local experts in Albania to assess the damage.

On December 1, the mayor of Durres Valbona Sako said she is resigning after her comments given during a TV interview on the earthquake death toll sparked outrage when she said “... it was a devastating earthquake but we are satisfied with 50 victims because in other cases it has been over 1,000.”

“Hurt by the strong negative reactions to a statement I made under a stress that exceeds my strength, I resign from the duty of mayor of Durres,” she announced on Facebook.