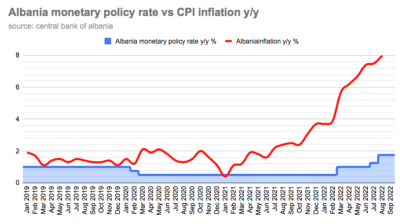 The Bank of Albania supervisory council decided on October 5 to increase the policy rate by 0.5 percentage points (pp) to 2.25%.

The decision was made based on rising inflation in Albania. While the annual consumer price inflation rate — at 8.0% in August — is below most countries in the region, it has still risen strongly since mid-2021.

The central bank also raised both the overnight deposit rate and the overnight lending rate by 0.5 pp each to 1.25% and 3.25% respectively.

The bank’s Intermediate Monetary Policy Report concluded that supply-side shocks and the heightened uncertainty in international markets “are being transmitted in an elevated inflation and decelerated economic growth in Albania”, said central bank governor Gent Sejko.

“In particular, foreign inflationary pressures, compared to our previous assessments, have turned to be stronger and more stable. In addition, these pressures are spreading across the economy owing to the soaring demand for goods and services, the dynamic labour market coupled with expectations on high inflation rates in Albania,” continued Sejko, as quoted in a statement from the central bank.

The bank’s supervisory council therefore “deemed that the swift upraise in prices remains the main risk jeopardising both the monetary and financial stability, as well as the sustained and long-term economic growth of Albania”.

While the main factors driving inflation in Albania are ising oil and food prices, Sejko noted that the price rises are spreading across a growing range of goods and services.

“War in Ukraine drove to a worsened existing global supply bottlenecks and arose new headwinds mainly in the markets of food items, energy and commodities,” the central bank governor commented.

"As a result, prices of these products pushed swiftly up in both global and Albanian markets. In parallel, the strengthened aggregate demand in Albania has underpinned the increased employment and wages, while has added to the domestic inflationary pressures.”

Although Albania’s economy continued to grow in the second quarter of 2022, growth slowed to just 2.2% from 6.5% in the first quarter of the year. Sejko noted a rapid deceleration of activity in the construction and industry sectors, and signs of deceleration in other sectors as well.

At the same time, growing demand for goods and services has put pressure on Albania’s labour market, with the unemployment rate dropping to the historical minimum of 11.1% in the second quarter. This has added to inflationary pressures by pushing up wages in the private sector.

“This performance supports the Albanian households’ income in the following period, though it is a premise for inflationary pressures to stay longer,” commented Sejko.

The central bank currently expects inflation will return to the target in the first half of 2024. It is projected to remain high in the next two quarters, after which it will start to decline.

According to the Bank of Albania, the balance of risks to the inflation is on the upside while the balance of risks to growth is on the downside. The war in Ukraine is the main source of uncertainty. “[The] escalation of the conflict may drive to higher prices of commodities, disruption of supply chains and lower economic growth, even a negative one, across the region and Europe,” Sejko concluded.