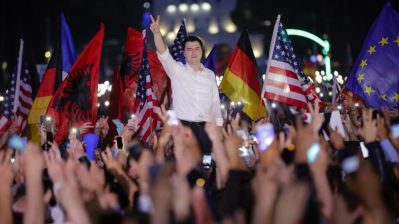 Albanian President Ilir Meta cancelled the local elections due to take place on June 30, saying that conditions do not exist for “true, democratic, representative and all-inclusive elections”.

Meta’s decision was announced after months of increasingly violent protests in Tirana and an opposition boycott of the parliament.

But Prime Minister Edi Rama challenged Meta’s decision saying that the elections will go ahead.

It’s not clear whether Rama has the power to force the election to go ahead.

Meta’s decision comes as EU nations are in the process of deciding whether to open accession negotiations with Albania and neighbouring North Macedonia.

“Free and fair elections are key Copenhagen criteria and in current circumstances, for lack of accountability by both parties, we are heading towards mono-party elections. In this way every possibility to open accession negotiations with the EU is undermined, the image of Albania as a NATO member is damaged, and Chairmanship in Office of the OSCE in 2020 is jeopardised.”

Clashes outside the parliament

Thousands of people joined the latest opposition protest led by the Democratic Party outside the parliament in Tirana on the evening of June 8.

As at previous protests, there were clashes with police as protesters threw firecrackers, flares and Molotov cocktails. Police fought back using tear gas and water cannon.

The Democratic Party said after Meta’s announcement that: “The decision to cancel June 30 was dictated by the unity of free Albanians with European and American values ​​for not accepting a monocratic, criminal-autocratic process of the Edi Rama gang.”

The Democrats, led by Lulzim Basha, have been pressing for months for Rama’s government to stand down and to be replaced by an interim government pending snap elections. The opposition accuses Rama and his government of corruption and links to organised crime.

Rama has resisted demands to resign, after his party won an outright majority in the last general election, allowing it to dispense with its former coalition partner, the Socialist Movement for Integration (LSI) founded by Meta. The LSI has since joined the opposition.

However, his government suffered a blow to its credibility this week when leaked recordings published by German newspaper Bild appeared to reveal that mafia groups had helped secure votes for the Socialists in the 2017 general election. Bild says Albanian investigators have confirmed the authenticity of the recordings, and Meta has called for a thorough investigation.

The twin spectres of corruption and organised crime — in particular linked to the drugs trade — have always raised questions about Albania’s prospects for progressing towards EU accession.

Five years later, the European Commission issued an unconditional recommendation in its latest enlargement report package for the EU Council to give the go ahead for the start of negotiations with both Albania and North Macedonia. During this period, Rama’s government has pushed ahead with reforms to the judiciary and has claimed considerable success in wiping out marijuana cultivation — although reports including from the US State Department say trafficking of hard drugs is still a serious problem.

However, even before Meta announced the elections were cancelled, several EU members appeared reluctant to greenlight the talks. Germany has postponed discussion on the issue in its parliament, while MPs in the Netherlands voted in May to call on the EU to suspend visa free travel for Albanian citizens in the Schengen zone over its concerns about organised crime. The Hague is also understood to be inclined not to approve the start of accession talks with Tirana.