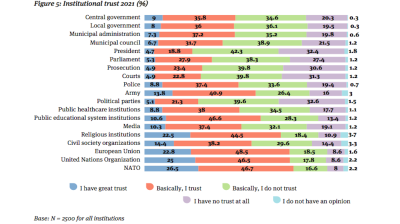 Albanians trust international intuitions such as Nato, the UN and the EU more than all domestic institutions and several times more than leading politicians, shows a poll from IDM Albania on public opinion in 2021.

However, trust in these institutions has declined since the previous survey carried out by IDM. Trust in the UN fell by 5 percentage points (pp), in the EU by 4 pp and Nato by 3 pp, according to the Public Opinion Poll: Trust in Governance 2021.

This follows repeated delays by the EU in agreeing to start accession negotiations with Albania. Moreover, Albania’s Prime Minister Edi Rama became increasingly critical of the EU both over the slow accession process and over the distribution of vaccines during the coronavirus (COVID-19) pandemic.

During 2021, “The COVID-19 pandemic continued to cause disruption to all facets of life in the country, including governance, citizen engagement and public service delivery,” the report said.

“Public perceptions and attitudes on the relevant issues targeted by the survey were also likely to have been a ected by the combined impact of an intensive parliamentary electoral campaign in April 2021; post-election political developments; the ongoing reconstruction programme in areas a ected by the devastating 2019 earthquake; and the EU’s failure to kick-start accession negotiations with Albania,” it added.

The most trusted domestic institutions are religious institutions, which had the trust of 67% of Albanians — more than twice as many as trust the president (23.5%), political parties (26.4%), the courts (27.7%) or the prosecution (28.4%). All four were among the least trusted institutions in the country.

Institutions with a higher level of trust include educational institutions (57.1%), the armed forces (54.6%) and civil society organisations (52.6%).

Despite the low level of trust in the courts and prosecution, up to 35% of Albanians believe that judicial reform is being implemented correctly and 57% believe that it will positively impact the development of the country, with both figures increasing since the previous survey a year earlier.

Albanian media also lacked credibility, with just one in four respondents saying they believed that the information provided by Albanian media was accurate or true.

The survey was carried out in all 61 municipalities of Albania, using a randomly selected nationally representative sample of 2,500 people.

Record inflation of over 30% has also dragged down households’ capacity to consume.