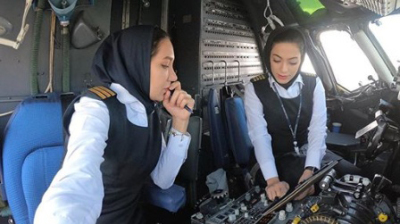 In a first for Iranian aviation, a female captain and female first officer piloted a round trip Tehran—Mashhad flight on October 14, making them the first women to have piloted a passenger flight in Iran without the assistance of male colleagues.

The past few years have seen Iran relaxing its rules on women taking top roles in its aviation industry. A woman, Farzaneh Sharafabadi, served as the CEO of flagship IranAir for more than 12 months between 2017 and 2018.

Captain Neshat Jahandari and her first officer Forouz Firouzi flew 160 passengers on the flight from Tehran to the northeastern city of Mashhad, and then returned with 171 passengers to the Iranian capital.

“Today is a special and unforgettable day in the Iranian aviation industry, and for the first time the guidance of the plane has been conducted by two Iranian female pilots,” Jahandari wrote on her Instagram.

Prior to this all-female flight, Jahandari was in the news for being the first co-pilot to fly in Iran with her husband as captain.

Women in Iran started learning to fly planes as far back as 1940. The first woman in Iran to receive a pilot's licence was Princess Fatemeh Pahlavi, the first Pahlavi king’s tenth child.

Following the Islamic Revolution in 1979 and the establishment of the Islamic Republic created under the guidance of Shi’ite Islamic jurists and clerics, women’s rights in Iran were heavily scaled back. That included curbs on their right to fly planes.

However, in recent years the rules have been relaxed, allowing women to take roles in aviation closed off to them for the past 30 years.

Turkey currently has 25 deportation centres, all filled to capacity with mostly Afghan refugees, and it plans to build eight more, VoA reported on August 31 in a ... more

Europeans shuttle between US, Iran delegations in Vienna effort to rerail nuclear deal

Officials from the UK, France and Germany are shuttling between two hotels in Vienna, serving as intermediaries between a US delegation and an Iranian delegation who are de facto in indirect ... more