Almost 50% of young Bosnians want to leave the country 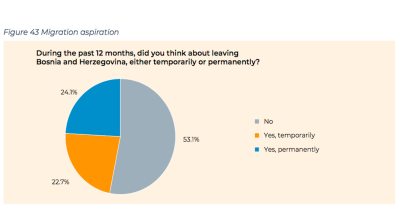 Almost half of young Bosnians (47%) said they are planning to leave the country temporarily or permanently, said the latest survey from the United Nations Population Fund (UNFPA).

Dissatisfaction with the quality of life in Bosnia is the main driver of young people's interest in going abroad. This is connected to financial instability, high unemployment especially among young people, high prevalence of perceived corruption and an inability to develop personally or professionally.

Factors encouraging people to stay in the country are proximity to their family and friends, and they say they would be keener to stay if the standard of living and quality of life improved, and if they would be able to find better and more stable jobs.

The research focused on young people in Bosnia & Herzegovina, aged between 18 and 29, and estimates that about 23,000 young people, or 4% of young people in the country, have already taken concrete steps and are very likely to emigrate in the next 12 months.

The UNFPA estimates that every year Bosnia experiences a new outflow of around 18,200 people. They increasingly include young people and young families who leave the country despite having stable prospect in Bosnia, and do not appear to plan to return.

Emigration is a major factor in Bosnia's declining population, which is projected to fall below 1.6mn by 2070 from today's 3.5mn.

“Since the early 1990s, Bosnia & Herzegovina has experienced several waves of high-level rates of out-migration into the European Union and other developed countries of the world,” said the report.

“Since the beginning of 2011, when Bosnian citizens holding biometric passports were able to travel without a visa to all the countries within the Schengen Area as well as to Bulgaria, Romania, Cyprus and Croatia, the trends of outward migration have intensified, and it is estimated that around 200,000 citizens from Bosnia, from all ethnic groups and national minorities, left the country, including a high percentage of young and well-educated people. Such outward migration dynamics from Bosnia and Herzegovina will most likely continue in the future unless there is a drastic change in the institutional and public discourse signalling systematic plans that curb the causes and symptoms of the current negative migration trends.”

Commenting on the impact of emigration, the report says it it lessens the economic and social contributions of educated and skilled people, creates workers’ shortages and contributes to a decline in productivity and deficits in pension funds.

According to the UNFPA report there is “little evidence” of social benefits from emigration such as investments, sharing technological, social, human capital, skills and ideas or advancing democratic processes. Remittances sent are mostly used for consumption purposes, the report says.