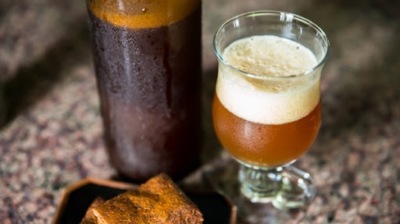 Made from fermented brown bread, the traditional drink kvass is part of every Russian's childhood
By bne IntelliNews April 7, 2020

AB InBev Efes has announced the launch of a kvass brand in Russia, called Silich, VTB Capital wrote on April 6, seeing the news as positive for the company in consolidating its share in the non-alcohol territory.

Similar to root beer, kvass is a traditional non-alcoholic Slavic and Baltic brew, made from rye bread and served chilled, mostly in hot weather.

"Bottling kvass is a new growth pillar in the non-alcohol category for the company (it had previously only been present through a beer, Bud 0.5%)," VTBC believes, estimating the kvass market in Russia at 140mn hectolitres, double that of 70mn hl for beer.

Moreover, the market is unconsolidated, with the share of the top three players standing at 13%, while the leading three brewers in Russia control around 70% of beer volumes.

"Within the non-alcohol beverage category, kvass accounts for 4%, and among the global brewers we note the presence of Carlsberg (kvass Khlebnuii Krai, energy drink Flash Up) and Heineken (energy drink Solar Power)," VTBC writes.

However, the market is seen as weak, losing 8.4% year on year in 2019 and with the season that is about to start in April being jeopardised by the social distancing measures, while the outlook on consumer spending in 2020 is vague.

As far as AB Efes is concerned, VTBC considers "the scale and streamlined relations with chains as a strong base for the new distribution of non-alcohol brands, and think that this could add to management’s guidance for a low-to-mid single-digit expansion in the international beer division."