ANALYSIS: Telling moment as Trump says it's getting harder for him to want to make a deal with Iran 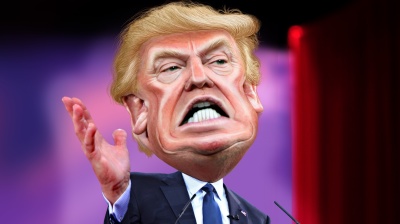 The Iranians might be getting under Trump's skin.
By bne IntelliNews July 22, 2019

US President Donald Trump said on July 22 that it is getting harder for him to want to make a deal with Iran. The situation, he added, could go either way very easily.

Trump made the comments to reporters at the White House amid growing tensions, most particularly between Tehran and the US and UK.

In what could conceivably be a strategy of baiting and rattling Trump—the betting being that the prospect of a possible military conflict with the Persian Gulf state is becoming an increasing nuisance to the American president’s campaign to get re-elected in 2020 given that he was partly voted into office on a promise to disengage US troops from war zones abroad—Iran made another attempt to embarrass Washington on July 22 by claiming that it had captured 17 spies recruited by the CIA and announcing that a documentary would be aired about the counter-espionage success. Trump rejected the claims as “just more lies and propaganda”.

Drones, tankers and “mental retardation”
Last week’s exchanges between Tehran and Trump included the Commander-in-chief announcing at the White House that US forces had downed an Iranian drone that got too near a US warship, prompting the Iranians to deny that they had lost any aircraft and suggest that the Americans had brought down one of their own drones by mistake. At the weekend, Iran demonstrated its punch in the Strait of Hormuz—the world’s busiest chokepoint for oil shipments—by seizing UK-flagged oil tanker Stena Impero in what the Iranians made clear was a direct response to the British capture of an Iranian tanker off Gibraltar at the behest, Tehran insists, of arch-hawks in the Trump administration. And in late June, President Hassan Rouhani described the White House as “afflicted by mental retardation”.

The Iranians say the “illegal sanctions” regime that the US is directing at their economy is so tough that it amounts to an “economic war”. Though Trump has for the past year made it clear he would welcome talks with Iran’s leadership with no pre-conditions, Tehran has regularly described him as a “rogue president” and an untrustworthy character of little to no integrity that they would never even contemplate dealing with unless he dropped the sanctions first.

If Trump is aiming for a big-time summit with Iran’s supreme leader or president in the run-up to his 2020 bid for re-election—somewhere along the lines of his encounters with North Korea’s leader Kim Jong-un—he’s getting nowhere fast. His apparent indecisiveness over his Iran strategy was demonstrated in June after Iran shot down a US drone—Trump ordered air strikes, only to abort them minutes before they were set to take place.

UK calls for European naval mission
Meanwhile, the UK, tail between legs having allowed the Stena Impero to sail directly into an Iranian trap even though Tehran had plainly stated it was out to grab a UK tanker, on July 22 called for a European-led naval mission to ensure safe shipping through the Strait of Hormuz.

“Under international law Iran had no right to obstruct the ship’s passage—let alone board her. It was therefore an act of state piracy,” Foreign Secretary Jeremy Hunt told the UK parliament.

“We will now seek to put together a European-led maritime protection mission to support safe passage of both crew and cargo in this vital region,” Hunt added.

He made a point of saying that the proposal would not involve contributing European military power to back Washington’s hardline stance against Iran, but if Boris Johnson becomes UK prime minister on July 24 as widely expected analysts will ask whether a close relationship between Johnson and Trump might see London give the US far more backing in its attempt to strangle Iran’s economy and force concessions on the country’s nuclear development and ballistic missile programmes and support provided to militias across the Middle East that are variously enemies of Israel and Arab allies of the Americans.

As things stand, the UK backs the EU line that the US sanctions attack on Iran should be opposed as the 2015 nuclear deal, despite the unilateral US withdrawal in May last year, remains valid.

Asked about the capture of the Stena Impero on July 22, US Secretary of State Mike Pompeo said: “The responsibility... falls to the United Kingdom to take care of their ships.”

The re-denomination of the Romanian leu in 2005 had lasting economic and emotional consequences for the population and for domestic and international markets.

One crucial difference between today’s Russia and both the USSR and the US is that it will not – cannot – pay the price of empire, whether in blood or treasure.