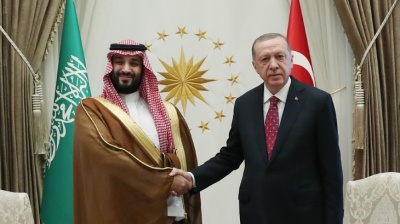 The West should hasten to improve relations with the “unsavoury” Turkish President Recep Tayyip Erdogan, perhaps winning him round by helping to rescue Turkey from its economic crisis, an academic at the Foreign Policy Research Institute has recommended.

Maximilian Hess, a Central Asia fellow at the institute, wrote in an analysis published by Foreign Policy on June 22: "The democratic West has a long and controversial history of entering alliances of convenience with dictators and strongmen around the world—unsavory but necessary partners in confronting threats to the international order. Denounced as ethically dubious, this sort of stance is also realist, balance-of-power politics par excellence. It enabled the world to unite to defeat Adolf Hitler in World War II and the West to win the Cold War.

“Atop the list of unsavory partners the West urgently needs better relations with today sits Turkish President Recep Tayyip Erdogan. That he is unsavory is clear: He has actively undermined Turkish democracy, undone decades of liberalization, weaponized migration, terrorized the Kurdish minority both at home and in neighboring Syria, and helped Iran violate U.S. sanctions. Most recently, he has threatened to block NATO membership for Sweden and Finland. It will take a long time before the West can genuinely trust him.

“However, the reality is that the West needs Erdogan more than ever. Russia’s brutal, all-out war against Ukraine has vastly raised Turkey’s profile on the geostrategic chessboard. Ankara has emerged as a key supplier of drones to Kyiv—shipments it has luckily shown no intention of halting. Ukraine’s chances of victory would be significantly improved if Turkish arms deliveries were expanded. Erdogan, who controls access to the Black Sea through the Turkish Straits, crucially shut the passage to warships in late February.”

At the same time, observed Hess, Ankara has also been willing to cooperate with Moscow on Ukraine where Erdogan sees an opportunity, such as in securing a route for blockaded Ukrainian grain exports, with Ankara reportedly asking for a 25% discount on Turkish grain purchases as part of the deal.

The West, he added, also needs Turkey on board in the economic war against Russia. “Ankara’s support alone can restrict the flow of sanctioned Russian goods in and out of the Black Sea, which continue even as Ukrainian ships are stuck in port,” said Hess. “Ankara’s help is crucial in cutting ratlines for Russian money and kleptocrats. Turkey has become a major destination for Russian money (and oligarchs’ yachts) fleeing sanctions and plays a growing role in supporting Russian President Vladimir Putin’s new autarkic economy. Turkey is one of the few major countries that freely accept Russian payment, undercutting the impact of Western banking sanctions. Bringing Turkey onboard would plug one of the largest holes in the sanctions regime.”

Most importantly, pointed out Hess, Turkey will be a key player in the reordering of European energy supplies, controlling, as it does, energy access through a number of crucial pipelines. The key to Europe’s Southern Gas Corridor strategy, for example, is gas from Azerbaijan supplied via Turkey’s Trans-Anatolian and Trans-Adriatic pipelines, feeding into the European gas grid in the Balkans and Italy.

Turkish-Russian cooperation includes the TurkStream pipeline, plans for Russia to build the $20bn Akkuyu nuclear power plant in Turkey, and Ankara’s acquisition of the Kremlin’s S-400 missile defense system. Although Turkey and Russia have occasionally sparred, backing differing sides in the Syrian and Libyan civil wars, for example, “relations have remained broadly warm and manageable”, said Hess, adding: “That only increases the potential strategic leverage the West would gain if it reversed Erdogan’s orientation.”

Posing the question, “What carrot could the West offer Erdogan for abandoning Moscow?”, Hess determined that Turkey’s economic crisis may be “just the opportunity”.

He noted: “With annual inflation reaching 73.5 percent in May, currency reserves near all-time lows, and the Turkish lira down by 30 percent versus the dollar year-to-date following a 44 percent drop in 2021, Turkey’s risk of default has spiked. Foreign investors have fled the market.

“Desperately searching for fresh foreign capital, Erdogan even patched up relations with his key regional rival, Saudi Crown Prince Mohammed bin Salman. It would be better for the West to offer Erdogan an economic lifeline than to allow Moscow to do so. The U.S. Federal Reserve and European Central Bank, for example, should consider offering Erdogan a currency swap line, a stabilizing instrument they have significantly expanded in recent decades. Access to dollars and euros could alleviate many of Ankara’s mounting economic challenges and set the stage for a more cooperative partnership.”

Erdogan faces an election that must take place by June next year at the latest and, according to Muhammet Kocak, an international relations specialist based in Ankara, as cited by Hess, the West’s strategy appears to be to go with the possibility that Erdogan will lose his bid for re-election. “Counting on Erdogan to allow a free and fair election and a potential peaceful transfer of power a year from now is idealistic at best and hopelessly naive at worst,” concluded Hess.

Georgia can become an EU candidate country, but not with Georgian Dream in power.

A new book exposes the hollowness of many Western assumptions about China’s role in Central Asia.

The Ukrainian economy has been badly hit by the war and is operating in an extremely challenging environment. Budget revenues have plummeted while expenditures stay elevated. Will the government be forced to restructure its debt again?

Ukraine has been clear that it needs more weapons from the West. So, what’s the holdup?
1 day ago
COMMENT: Why replenished ties between Uzbekistan and Turkey suit both Tashkent and Ankara
2 days ago
COMMENT: Georgia drops out of the Trio – why did this happen?
4 days ago
Book review | China’s “detached” power
4 days ago
COMMENT: Ukraine’s Eurobonds – pros and cons of restructuring
5 days ago