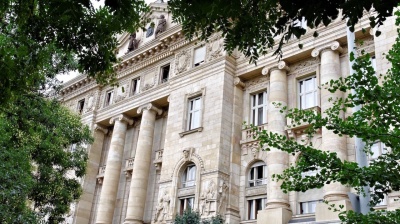 Analysts have raised questions about the wisdom of the National Bank's (MNB) decision to end the monetary tightening cycle after it raised the base rate by 125bp to 13%, above the 75-100bp forecast.

The MNB should continue to raise interest rates until inflation appears to have peaked, which could happen at the end of 2022 at the earliest, Markonom Institute said in a note to investors.

Inflation is expected to rise further in the autumn months to 20%, mainly due to factors outside the scope of monetary policy, such as the scaling back of energy subsidies and higher food prices caused by the drought, according to policymakers, who raised inflation forecasts for 2022 and 2023 sharply from the last forecast three months ago.

The success of MNB’s measures to absorb excess liquidity in the banking system will also be key, according to Makronom. The central bank will raise the mandatory reserve ratio of banks from October 1 and introduce a longer maturity deposit facility to channel money parked in its one-week deposit facility.

The MNB is returning to its previous "unorthodox" monetary policy toolkit, primarily trying to influence short-term interest rates by managing interbank liquidity, but it is questionable how that will be assessed by foreign investors, Almundi Fund Management analyst Peter Kiss said. This is especially true in light of the recent forecast, with inflation set to decelerate to the 4% tolerance band of MNB only in 2024.

The central bank has successfully conducted this liquidity policy in the past in a low-interest rate environment, but it is questionable how successful this will be when inflation is high and at a time when central banks around developed economies are getting rid of unconventional instruments and upping rates to fight inflation, he added.

Magyar Bankholding analyst Gergely Suppan noted that inflation risks have become balanced and forward-looking yields have turned positive. The improved monetary transmission and the fact that Hungary seems to be closer to resolving its dispute with the European Commission to secure EU funds could have played a part in the MNB’s decision, he added.

The forint initially strengthened against the euro after the 125bp rate hike, but gave back its gains after comments by MNB governor Gyorgy Matolcsy on ending the rate cycle. In the evening hours, the EUR/HUF rate was 407.5, which meant a slightly stronger forint from the 408 earlier in the morning. The forint was trading at a historic low against the dollar at 426, a 6% loss in five days.

M&A in Emerging Europe fell by 20% to €32.93bn in 2022
Council of Europe harshly criticises Estonian e-residency programme
Turkey’s regime working overtime to ensure no lira ‘freak show’ ahead of elections