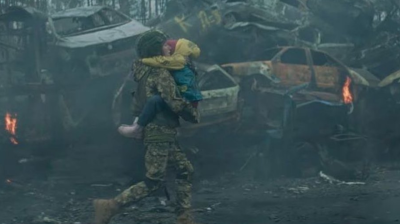 Ukrainian soldier carries child to safety against background of devastation. / Still from the 'Stefania' music video
By Social media correspondent Dominic Culverwell May 20, 2022

Whilst all eyes are on Donbas as Russia continues its devastating invasion of Ukraine, another war is being fought on our TVs, phones and computers: the culture war. Right from the start of the offensive, Ukraine has been quick to establish its cultural narrative and ensure that in this war, it will be victorious.

Last weekend, the Ukrainian hip-hop group Kalush Orchestra became a household name after their triumphant performance at Eurovision, which has since garnered over 15mn views on YouTube. At the end of the performance, the lead singer made an emotional plea to the crowd: “Please help Ukraine. Help Mariupol. Azovstal”. Despite political messages being banned from Eurovision, the band was not penalised and received a round of applause and a record-breaking 631 points.

One day later, the band released the music video for their winning song ‘Stefania’, dedicated to Ukrainian mothers fighting the invasion, which went viral and leapt onto YouTube’s trending page. In the video, several soldiers carry their children to safety through the war-torn country, shot on location in the towns around Kyiv that violently suffered from Russia’s occupation, including Bucha. The grim reality of Ukraine’s ravaged towns along with the evocative lyrics pack an emotional punch that has been viewed over 10mn times in just three days.

However, this is not the first Ukrainian song to go viral since the war began. Days after the Russian invasion, famous Ukrainian musician Andriy Khlyvnyuk uploaded a video of himself in Kyiv singing the folk song “The Red Viburnum in the Meadow”, having stopped his US tour to return and fight. Millions have watched Khlyvnyuk standing in the centre of the capital dressed in the Territorial Defence uniform, singing a patriotic Ukrainian song that was banned during the Soviet Union and which was punishable by imprisonment.

Several foreign artists were inspired by Khlyvnyuk’s rendition, including legendary rock band Pink Floyd. They performed their own variation of the song using Khlyvnyuk’s vocals and uploaded the video to YouTube with the goal of raising funds for Ukraine. Band member David Gilmour, who has a Ukrainian daughter-in-law, said: “We, like so many, have been feeling the fury and the frustration of this vile act of an independent, peaceful democratic country being invaded and having its people murdered by one of the world's major powers”.

These videos and performances are significant victories for Kyiv. For most people outside Ukraine, “The Red Viburnum in the Meadow” and its yearning for a “free” and “glorious” Ukraine liberated from the “shackles of Moscow” will be unfamiliar. But with millions of non-Ukrainians now recognising the song, it shows the world the depth of Ukraine’s struggle for independence and helps distinguish Ukrainian culture from Russian. Importantly, it moves away from the narrative that Ukraine and Russia are “fraternal” countries, a line regurgitated by numerous world leaders but dismissed by Kyiv as Kremlin propaganda.

It’s not just professional singers going viral. The recording of a tiny Ukrainian girl singing Frozen’s “Let It Go” in a bomb shelter in Kyiv moved millions in March, including Idina Menzel, the voice actor of the film’s protagonist, Elsa. Menzel published the video on Twitter with the caption “We see you. We really, really see you”.

Whilst videos like this from a societal level tug at heartstrings and build sympathy for Ukraine, the Ukrainian Armed Forces (ZSU) have a different agenda: make Ukrainian fighters cool. The ZSU regularly post music videos and montages online, co-opting social media trends and tapping into the digital youth culture with some surreal and funny results.

In one example, the General Staff of the Armed Forces of Ukraine uploaded footage of Ukrainian artillery striking Russian armoured vehicles to the cover of Axel F by Crazy Frog, an early meme from 2005 known as “the Annoying Thing”. The trolling gained hundreds of thousands of views on Twitter, with many commenting on the bizarre song choice. However, it did its job, partially aided by the strangeness of the video which spawned numerous memes, and helped the destruction of a Russian tank go viral.

In another video, the ZSU created a montage of Ukrainian artillery to a song by the American hip-hop duo Suicideboys. The slick video utilises the aesthetics of the online Soundcloud rap subculture, featuring slow-motion shots of artillery shooting, close-ups of a soldier in a balaclava and images of destroyed Russian army vehicles. Whilst some praised the video, others called it “cringe” and noted the odd song choice for a military video. Nevertheless, it still succeeded in making an impact online. Importantly, it retained the internet's DIY character, whilst a bigger budget or more polished video would make it too overtly propaganda-laden.

Although not always hitting the mark, the viral content shows Ukraine’s understanding of the online cultural sphere and its willingness to think outside the box. Videos, and particularly videos to music, have become prevalent on social media, thanks to Instagram introducing the Reels feature in 2020 and the major influence of TikTok, which specialises in matching music to videos. Both on a governmental and societal level, Ukraine produces digital content to protract its relevance, battle the fleeting online news cycle and ensure that its story is heard.

Russia has made similar attempts to assert cultural dominance; however, it has failed to find success. In one infamous example inspired by last year’s sea shanty trend on TikTok, Russian singers and dancers dressed as nurses sing a Luhansk People’s Republic song whilst positioning themselves into the “Z” and “V” symbols, synonymous with support for the war. Its archaic and blatantly propagandistic style was quickly mocked online and shows how far removed the Kremlin is from contemporary digital campaigns compared to Kyiv.

This is by no means surprising. Ukraine is a tech-savvy nation with a government well-versed in online marketing, much more so than Moscow. Famously, the campaign team of Ukrainian President Volodymy Zelenskiy produced slick viral videos during the 2019 presidential campaign which helped Zelenskiy’s landslide victory.

The success of Ukraine’s cultural narrative means that to side with Ukraine is to side with the right side of history. When Kulash Orchestra pleaded to the audience to help Azovstal and Mariupol, there was little debate about whether they had done the right thing. Even though Eurovision has punished participants in the past for making political statements, had they done so this time, no doubt there would have been an uproar. Instead, Ukraine’s cultural narrative, rooted in a struggle for independence, is greeted with cheers, sympathy and respect.

Kremlin VTB bank to be hit by investor class action for seizing foreign shares
14 hours ago
Russian metal giants Rusal and Norilsk Nickel could merge under sanctions
15 hours ago
US and Chinese slowdown will tip the world into recession, says IIF
4 days ago
NEO: Rising in the East, Setting in the West: Russia strengthens trade with Global East
5 days ago
Stagflation fears continue to rise
5 days ago