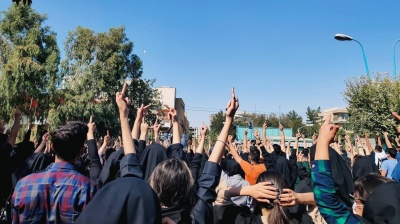 In the unrest, some Iranians have picked up the Western practice of sticking up the middle finger, or "flipping the bird", to authority. / social media.
By bne IntelIiNews October 2, 2022

Iran’s anti-regime protests have entered their third week, though—amid the internet blackouts deployed by officials—the media is still struggling to paint a reliable picture of how strong the demonstrations are and how heavy the crackdown launched against them has become.

Also, for a second weekend there were many protests held in cities around the world to show solidarity with the protesters in Iran, at least 80 of which, and possibly many more, have died in clashes with security forces. Some of these also met with a violent response from the authorities. In Bern, Switzerland, police on October 1 fired rubber bullets as protesters demonstrated outside Iran's embassy in the city, with two men climbing over the embassy's fence and pulling the Iranian flag from a flagpole. 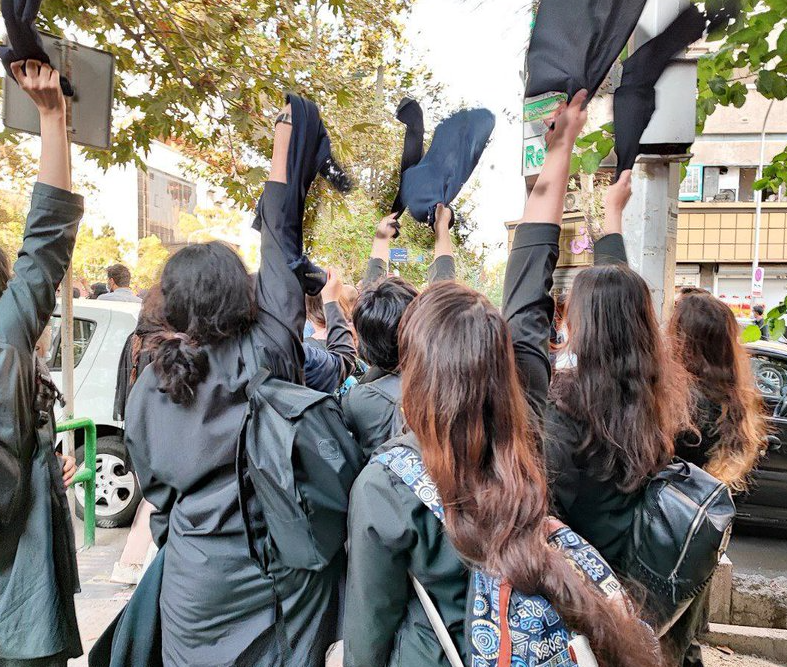 The protests started out as an angry social reaction to the death of 22-year-old Mahsa Amini, a Kurdish woman who died on September 16 after being taken into police custody by a Tehran morality patrol who detained her because, under Islamic law, she was allegedly wearing her headscarf too loosely. Sixteen days later, with protests having been seen in 100 or more Iranian towns and cities, the public mood seen in the demonstrations has definitively shifted towards injustices of the Islamic Republic system as a whole, though the grip of hardliners on the key mechanisms of the state seems firm, say some analysts.

In protest footage, teenagers now routinely appear in mobile phone videos removing their headscarves in defiance of the law. Many women have been seen in social media footage burning their hijabs in the street. The fact that the demonstrations are often seen as led by women makes them harder to put down for the Iranian authorities, who have nevertheless been accused of “mercilessly confronting” protesters, by Amnesty International. It quoted leaked documents from Iran’s highest military body.

“The Iranian authorities knowingly decided to harm or kill people who took to the streets to express their anger at decades of repression and injustice. Amid an epidemic of systemic impunity that has long prevailed in Iran, dozens of men, women and children have been unlawfully killed in the latest round of bloodshed,” said Agnes Callamard, Amnesty International’s secretary general.

She added: “Without determined collective action by the international community, which needs to go beyond mere statements of condemnation, countless more face being killed, maimed, tortured, sexually assaulted or thrown behind bars solely for their participation in protests. Leaked documents obtained by Amnesty International bring into sharp focus the need for an international independent investigative and accountability mechanism.”

The massive Iranian diaspora means there have been countless protests called the world over to back the protesters in Iran, with some of the biggest crowds seen in San Francisco and Toronto over the weekend. Video uploaded to the internet from Wellington, New Zealand, showed a small group of Iranian-Kiwis attacking the Iranina embassy villa with paint, while in London a woman clad only in lingerie was seen trying to forcibly enter the Iranian consulate in Kensington.

The chant “Women, life, freedom!” has become the mantra of the protests in Iran and abroad. It has even been seen on the famous billboards of London’s Trafalgar Square. Iran’s large cohort of graphic designers have incorporated the phrase on an alternative Iranian flag.

In the Canadian protests, Hamed Esmaeilion, a former dentist and husband and father of two people who were killed when the Iranian military blundered in shooting down Ukraine International Airlines flight PS752 near Tehran two years ago, demanded justice for his family. Esmaeilion is among those who believe Iran has never revealed the true chain of events that caused the tragedy.

He was part of huge crowd of people descending on the city over the latest injustice by the regime in Canada has become a big draw for Iranians in recent years looking to escape Iran. It now has one of the largest Iranian expatriate populations in the world.

In Los Angeles, home to many Iranians who left Iran around the time of the 1979 Islamic Revolution, thousands joined a protest in Pershing Square on October 1. People shouted the now familiar rallying cry of “Women, life, freedom!” into megaphones.

The historically Iranian royalist stronghold of Los Angeles also saw a weekend protest, with some in the crowd demanding the restoration of the Pahlavi monarchy.

Back in Iran, on October 2, protests erupted on streets and university grounds in the central city of Isfahan. Video footage showed hundreds of students chanting against the regime. There were also reports of a possibly deadly clash between students and security forces at Tehran’s Sharif University, traditionally a hotbed of dissent, on October 1, while Iranian state media shared a video of pro-government students, who gathered at Ferdowsi university in Mashhad, chanting "the Islamic Republic is our red line".

Earlier in the day, Iranian lawmakers chanted "thank you, police" during a parliament session.

The protests continue to be leaderless, but they are typically spearheaded by Generation Z individuals born around the year 2000, with millennials (born roughly from 1981 to 1996) in support. Few among the younger generation, dubbed “Iran’s Gen Zee”, appear to have any time for the current Iranian government. 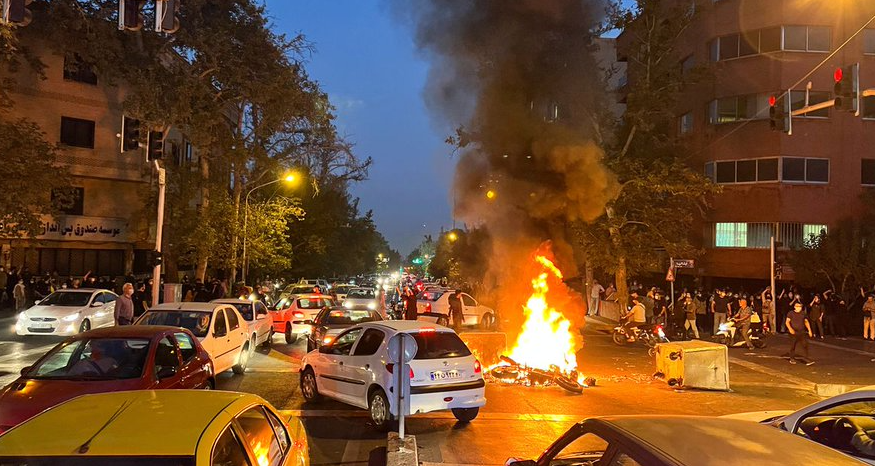 Activist Twitter account 1500tasvir posted a video said to show protesters in Isfahan calling for a general strike and setting up a road block in an attempt at persuading truck drivers to join their ranks. (unverified photo/screengrab) (Credit: 1500 tasvir).
A notable feature of the protests is the trend of people sticking up their middle finger, or “flipping the bird”, to authority. Historically, this offensive gesture used in the West has not been used in Iran—its appearance is another sign of changing social norms in the country.

Some unverified video footage showed teenage girls tearing out pictures of the founder of the Islamic Revolution, Ayatollah Ruhollah Khomeini, from school books and writing popular hashtags of the ongoing protests on the pages. Another unverified piece of footage purportedly shows a police commander breaking ranks and posting videos instructing protesters how to evade the security forces.

Videos continue to leak out of Iran despite the authorities’ dismantling of internet connectivity, a tactic wrecking businesses in the country’s digital economy.

For observers surprised that the crackdown has not been even more crushing and bloody than it has been so far, there is some evidence that manoeuvring over the eventual succession to the supreme leader, Ayatollah Ali Khamenei—amid heavy speculation that he has suffered a significant decline in health—and rifts among officials over security tactics have complicated the efforts of Iran’s clerical rulers to curb the unrest.

Al-Monitor, meanwhile, on September 28 reported that Iranian protesters were beginning to shift tactics to adapt to a sweeping campaign of arrests and severe internet outages aimed at stifling their message. People, for instance, rather than taking to the streets, were reported as taking to rooftops and windows at nights “shouting slogans that target the very basis of the system.”

Among those keeping up the call for a tough response to the protesters was Imam Mohammad Javad Haj Ali Akbari, a leader of Friday prayers in Tehran, who on September 30 said: "Our security is our distinctive privilege. The Iranian people demand the harshest punishment for these barbaric rioters."

In another anti-regime move, a rights group has called on Fifa to ban Iran from the World Cup finals, due to take place in Qatar during November/December, on the basis that the authorities block women from watching games in their own country.