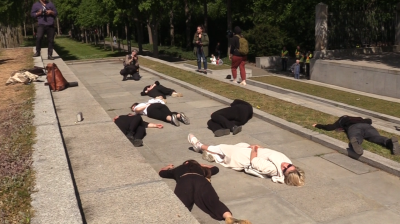 Die-in staged by protester at Soviet War Memorial in Berlin
By Dominic Culverwell in Berlin May 10, 2022

Pro-Ukrainian activists staged a die-in protest during Russian Victory Day commemorations in Berlin on May 9.

The group, covered in fake blood and painted with slogans such as “Fuck War”, lay down on the steps of the Soviet War Memorial in Treptower Park to protest against the Russian invasion of Ukraine.

Victory Day is commemorated by Russians on May 9 as the end of the Nazi regime, with thousands gathering at the East Berlin memorial to remember those who died in the War. However, controversy arose after Berlin police banned the display of Russian and Ukrainian flags amid fears of a confrontation between the two groups.

One of the protesters, who chose to remain anonymous but recently moved to Berlin from Russia, explained how their action received backlash from the crowd:

“They told us to stand up and that we need to give birth to children,” she said. “The reaction we had was expected. [The action] was provocative but maybe in a couple of days or months, when they are not full of aggression and hatred, something will click and they will think in another direction or read some different media”.

She went on to explain how she is making the most of the freedom to protest in Germany, which is in stark contrast to her homeland, where unauthorised demonstrations have been a criminal offence since 2014.

Several Russian art activists protesting about the war have been detained by police since the invasion of Ukraine on February 24.

Artist Sasha Skochilenko was arrested after replacing price tags of items in supermarkets with information about Russian military aggression in Ukraine. In one instance she printed text on a jar of coffee reading: “The Russian army bombed an art school in Mariupol. Roughly 400 were sheltering there from military fire”.

But this has not deterred some from continuing to protest. A Russian collective called the Feminist Anti-War Resistance (FAS), founded on February 24, immediately called for feminists across Russia to “join peaceful demonstrations and launch offline and online campaigns”, denouncing the war in Ukraine and Russian President Vladimir Putin.

The group garnered significant attention at the start of April after placing homemade graves in regions across Russia as part of a project called “Mariupol 5000” bearing information about the thousands of citizens killed in the besieged Ukrainian port city.

“We propose to go out into the courtyard of any house and install a homemade cross with a sign in memory of those who died in Mariupol. We want to try to install 5,000 crosses all over Russia”, FAS Tweeted on March 31. “You can write text on a fixed plate (...) ‘Russian troops killed 5,000 civilians in Mariupol. Now the dead are buried in the courtyards of their houses. This is a war, not a special operation.’”

US and Chinese slowdown will tip the world into recession, says IIF
New Putin decree could force foreign stakeholders out of Sakhalin-2 gas project
Russia threatens to sever diplomatic relations with Bulgaria over diplomat expulsions